Built just before the start of WWII, it is known as the Göttinger Ei (“an egg from Göttingen”) or the Schlörwagen. Its designer, Karl Schlör, a Krauss Maffei engineer, proposed a bodyshell with extremely low drag coefficient as early as of 1936. A model built at AVA (Aerodynamic testing Institute, Göttingen) was dubbed “tortoise”. During the wind tunnel tests, it showed an anheard-of Cd: 0.113. The real full-scale car was built on the rear-engine Mercedes-Benz 170H chassis: With the body built by Ludewig Bros., Essen, the Schlörwagen was also tested in the AVA wind tunnel, Göttingen. Its Cd could not compare to the model’s but still was remarkably low: about 0.18.

In 1939, the Egg was presented to the public. It was the star of Berlin Auto Show. But Herr Schlör succeded in testing his car in the aeromobile role, with Soviet M-11 135hp engine and propeller installed.

The wheelbase was set up was 2.60 meters , the vehicle was 4.33 meters long and 1.48 meters high. The width of 2.10 meters was necessary to allow the wheels to run within the body. The body produced in a Essen-based company was established drop-shaped, had flush windows and a closed bottom . However, the aerodynamic design affected the driving safety of the Schlör car and made him highly susceptible to crosswinds. 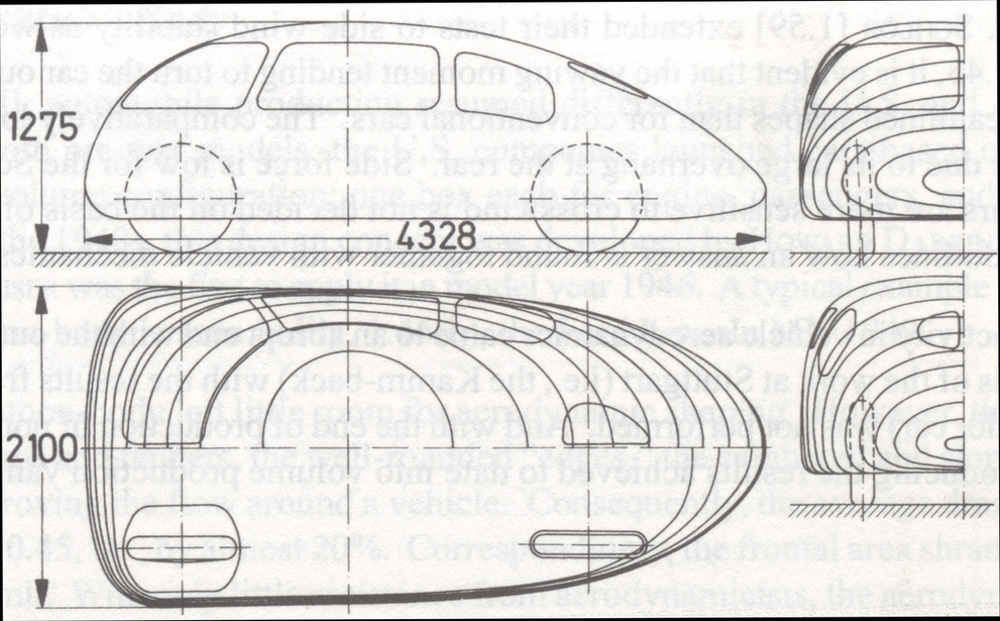 In a test drive with a production Mercedes 170H as a comparative model of Schlörwagen with about 135 km / h top speed to 20 km / h faster than the Mercedes and consumed with 8 liters of gasoline per 100 kilometers between 20 and 40 percent less fuel than the control vehicle was 10 to 12 liters. The car generated with these values at the IAA 1939 in Berlin stir , but was perceived as ugly because of its design from the audience. 1943 Schlörwagen was equipped with a rear propeller and thus completed testing in Göttingen. The prototype of the car went to the end of the Second World War lost , his whereabouts are unknown.

The fate of the Schlörwagen is unclear. Some sources say it was taken to Britain. No proof, though. Its inventor died in 1997.