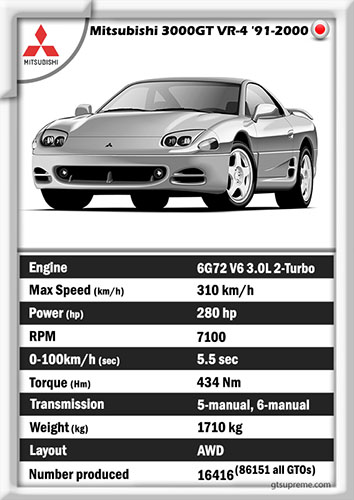 Mitsubishi GTO is a sports car built by Japanese automaker Mitsubishi Motors between 1990 and 2001. In most export markets it was rebadged as a Mitsubishi 3000GT. Also produced as Dodge Stealth in US. Design was the result of the collaborative effort between Chrysler and its Japanese partner, Mitsubishi Motors. 1990-1993 The first generation model incorporated many of Mitsubishi’s contemporary performance-enhancing technologies, such as full-time four-wheel drive, four-wheel steering, active aerodynamics featuring automatically adjusting front and rear spoilers, sport/tour exhaust modes and electronically controlled suspension (ECS). Active Aerodynamics were not available on the Dodge Stealth. Visually, both cars featured pop-up headlights and noticeable “caps” on END_OF_DOCUMENT_TOKEN_TO_BE_REPLACED