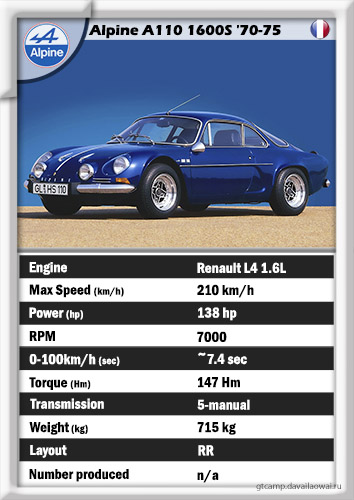 Like other road-going Alpines, the 1961 A110 used many Renault parts – including engines. Mainly used Renault R8 parts. The A110 achieved most of its fame in the early 1970s as a victorious rally car. After winning several rallies in France in the late 1960s with iron-cast R8 Gordini engines (1.1, 1.2, 1.3 Liters engines). The car reached international fame during the 1970-1972 seasons when it participated in the newly created International Championship for Manufacturers (rally race), winning several events around Europe and being considered one of the strongest rally cars of its time. Notable performances from the car included victory on the 1971 Monte END_OF_DOCUMENT_TOKEN_TO_BE_REPLACED