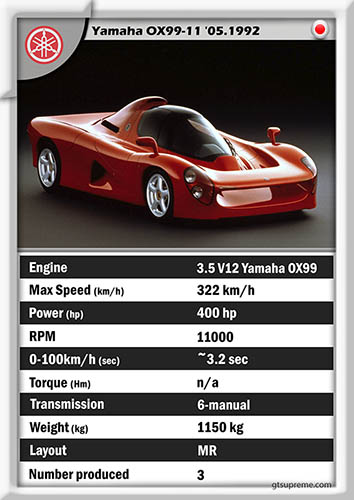 Yamaha began competing in Formula One as an engine supplier in 1989, and using the experience it had gained during that time it wanted to build a price-no-object car based on actual Formula One technology. Even though the Formula One project was doing poorly in competition, by 1991 the team had just produced a new engine, the OX99 V12 3.5L. Designed by Takuya Yura Development Yamaha had conceived the OX99-11, but had been struggling to find a partner who could help them realize their ambition. Strangely it was the sporting goods division (with products ranging from Yachts to squash racquets), rather than the motorcycle arm, END_OF_DOCUMENT_TOKEN_TO_BE_REPLACED