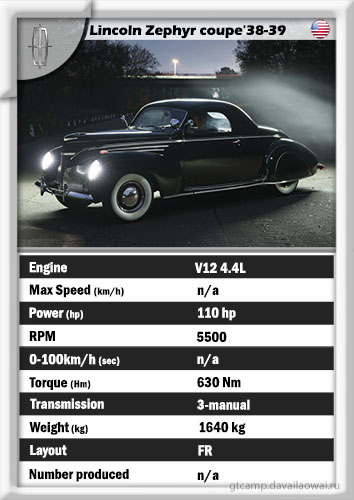 The name “zephyr”, derived from the Greek word “zephyrus”, or the god of the west wind. In fact, the Lincoln Zephyr actually had a lower coefficient of drag than the Chrysler Airflow. Moreover The Lincoln Zephyr succeeded in reigniting sales at Lincoln dealerships. Production of all American cars halted in 1942 as the country entered World War II, with Lincoln producing the last Lincoln Zephyr on February 10. To make it clear, Lincoln Zephyr was produced since 1936 till 1942 with reborn try in 2005. But i choose ’38-39 model years because it’s outstanding airflow streamlined aerodynamic design and uniquenes. Zephyr other years line-up (ALL END_OF_DOCUMENT_TOKEN_TO_BE_REPLACED

Ford redesigned the Lincoln MKZ for the 2013 model year, sharing the company’s CD4 platform with Fusion and Mondeo. The concept model debuted at the 2012 North American International Auto Show. Elegant simplicity – that’s how design of MKZ can be described. Designer: Max Wolff (Exterior) & Soo Kang (Interior). And what is really special and damn hot in this car is her simply perfect tail lights ♥. The production version of the second-generation MKZ was unveiled at the 2012 New York Auto Show. Engine variations of ’13-16 MKZs: Ford offered the 2013 MKZ with three powertrains: a 240-horsepower EcoBoost 2-liter four-cylinder (FWD or AWD), END_OF_DOCUMENT_TOKEN_TO_BE_REPLACED