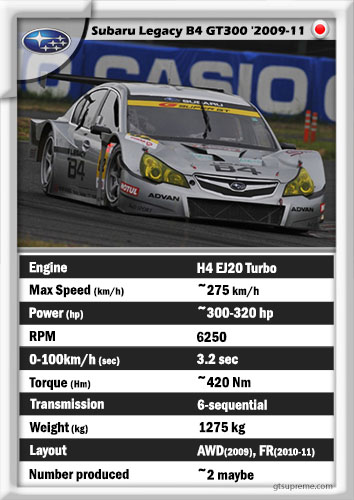 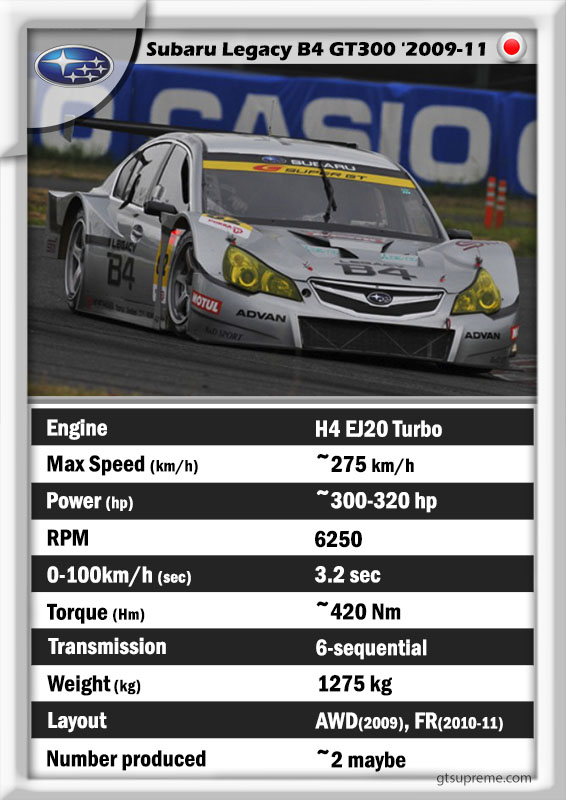 In 2009 “R&D Sport” (Atsugi city, 2584-1,Ookami,Hiratsuka,Kanagawa prefecture,254-0012. Representative: Mr. Shinji Motojima) began a partnership with Subaru in 2009 using a AWD Subaru Legacy B4 that debuted at the sixth round of the season at Suzuka. However the car developed problems with its front differential and was retired from the first race. 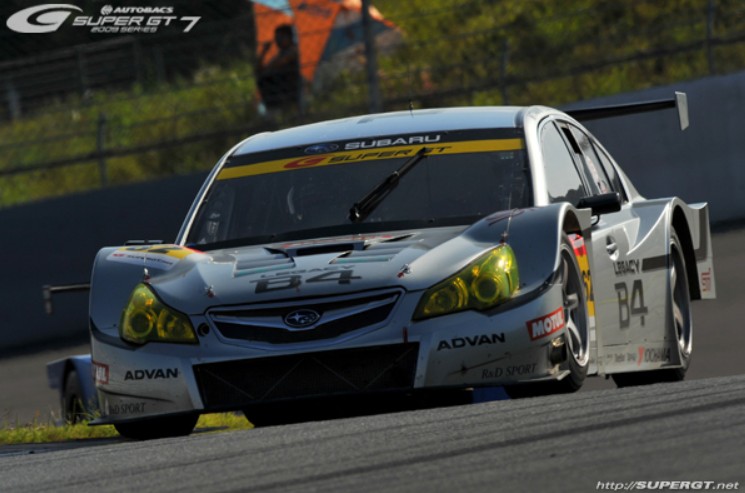 The power unit is a horizontally-opposed engine (EJ20 Boxer-4 + turbo) supplied by Fuji Heavy Industries and Subaru Tecnica International (STI), who control Subaru’s motorsports activities, and who were responsible for the development of the tuning and management system.

The drivetrain in 2009 was the Symmetrical AWD system that makes up the basic structure of any Subaru car, with R&D Sport, who has a wealth of experience, undertaking the production and assembly.

For the remaining rounds of the 2009 season the team made steady progress – but were still massively behind pole time in this hugely competitive class.

2010 was a shift from the disappointing performance of the Legacy in 2009, by changing the car from an AWD setup to FR, Kota Sasaki and Tetsuya Yamano won at Suzuka (Pokka 1000km).

Unable to find the best setting during the previous day’s qualifying round, the Legacy started the final race from 11th on the grid.

After the qualifying and free-practice session on the final morning, the team worked hard to identify the ideal setup from the night session, helping the Legacy start the final race in tip-top shape.

Starting driver Yamano closed in on the lead cars on the first lap, moving up to ninth place on the second lap, then sixth on the eighth lap.

In the high temperatures, as rivals struggled to increase pace on the warm surface at the beginning of the race, Yamano pushed on, taking second place on the 19th lap.

Three hours after the start, as drivers turned their headlights on for the night session, Sasaki, who took back the wheel at the last pit stop, made a blistering charge and marked the fastest lap time.

Taking the lead on the 88th lap, Sasaki pulled away from the rest of the pack to claim Legacy’s first win with a huge 17-second gap.

Yamano said: “Last year, as it had just made its debut, the Legacy wasn’t able to do so well in the Suzuka 700 km Race. But since then, it has become a very fast car. And not making any compromises until the last minute definitely paid off in our search for the best setup and gave us a win. I would like to thank everybody for their support.”

Sasaki added: “The team worked very hard to make it a very good car in a very short time. I was looking to win before the end of this year, so I am very happy to do it on my home ground at Suzuka.”

2011 was an even better performance, with Sasaki and Yamano winning at both Suzuka and Autopolis, finishing 4th overall in the drivers’ championship. 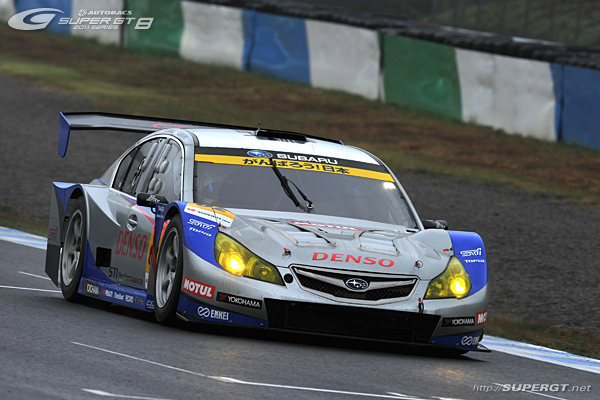 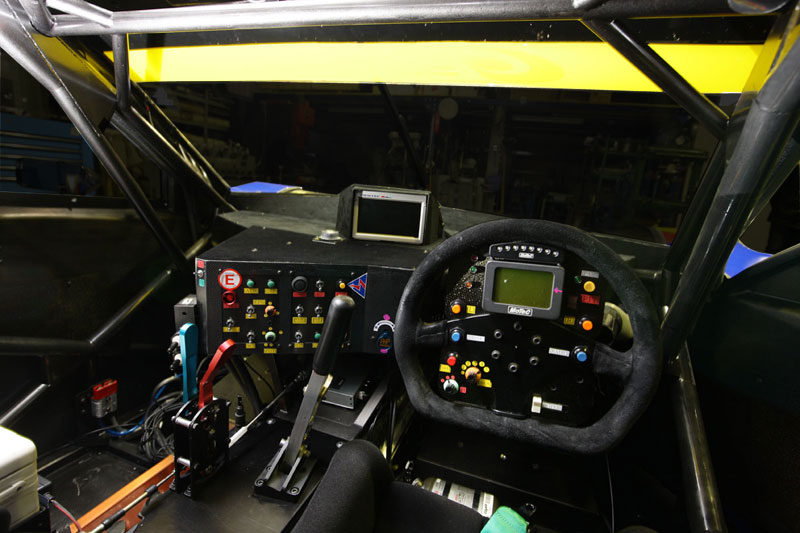 After finishing convertion of road going version of Subaru Legacy B4 (BM) recently, we tryed to reproduce the drivers feeling and here we publish Super GT version of Legacy GT300 for Assetto Corsa. Tha pack includes 2 cars: 2009 version with All Wheel Drive, and 2010+2011 version with Rear Wheel Drive. As bonus few more skins from old GTR2 sim made by some modders as well as original 3D model. 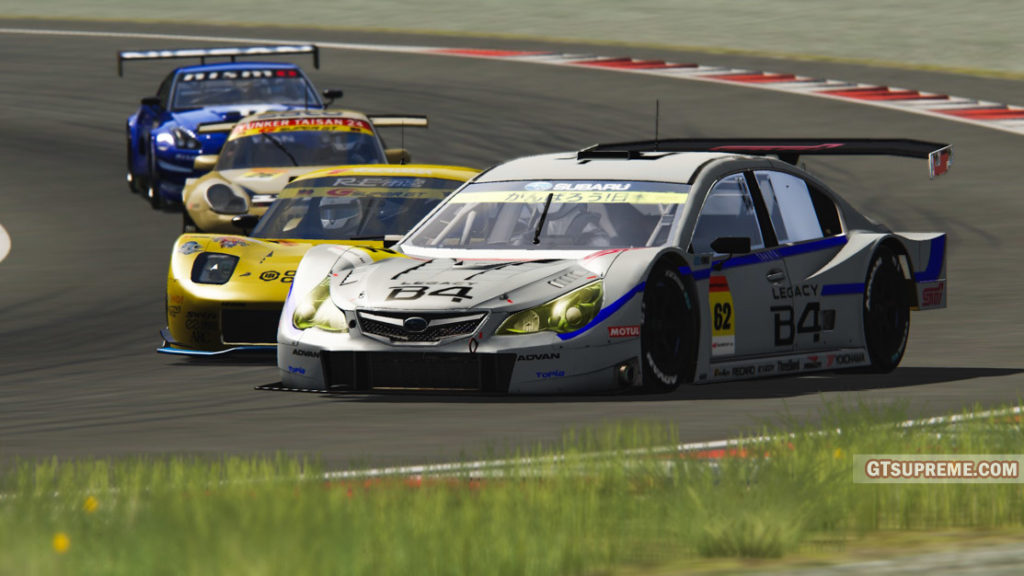 Unlike other GT300 mods we have found in net, where cars have different suspension type from real car, or 600hp which is ridiculous and no sence of trying it, The purpose of GTSUPREME is to make car similar to real specs, so try and enjoy it!

We tryed to make it as close as possible accoring to found information of this car from “R&D” and SuperGT website sources.

Would be like to hear your feedback was it good or not, maybe some suggestions.

Ver 1.0 logs:
• 2 animated dashboards (one on the steering wheel and another in interior part from passenger angle of view);
• Ai – more or less they ride fast and rather competitive
• Three types of slicks (Soft, Medium,  Hard)
• NO ABS and Traction Control – there is no electric helpers in real series. You can operate Brake Power or Downforce.
• Adequate power.lut rpm/torque curve with engine.lut
• Rim blur, Lights
• Full adjustable setup (original one are good for beginning)

Check the road version of Legacy B4 Bm as well