Haters gonna hate, but this grotesque and beautifull car is for special drivers.

The Mitsuoka Orochi (光岡大蛇) is a Japanese supercar designed and built by Mitsuoka Motors as a concept car in 2001, with updates and revisions to the design appearing in 2003 and 2005. In October 2006, Mitsuoka officially launched the production version of the Orochi. The first Orochis were set to be delivered in January 2007. The car takes its name from the mythical Yamata no Orochi 8-headed Japanese dragon. Mitsuoka says “Orochi is the car to ride to gather attention from everyone”, and categorizes this car as a “Fashion-Super Car”.

The Orochi was originally unveiled at the 2001 Tokyo Motor Show as a concept car based on the Honda NSX platform.

The car was featured in Top Gear (season 11, series 6) during James May short review of Mitsuoka in Tokyo. 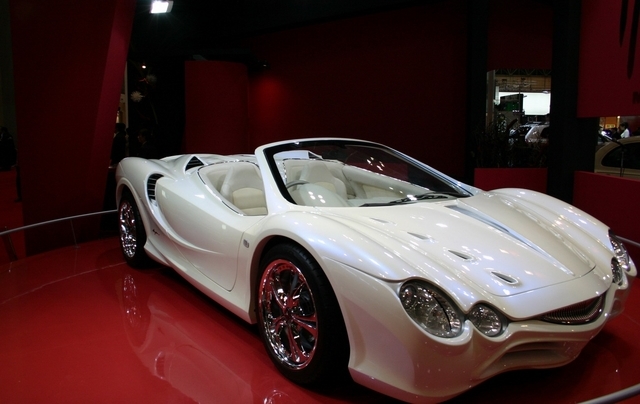 The Orochi’s interior is fully trimmed with leather. The car is also equipped with motorized wing mirrors and windows, A/C, airbags, low-beam side HID, an immobilizer, and a Panasonic satnav.

In November 2014 another edition was announced, with a striking multi-coloured paint scheme designed to invoke the giant robots from the 1990s Evangelion anime series. It is based on the Gold Premium platform, will be limited to one car, and sell for 16 million yen = 140K USD.