In the Soviet Union, where the newly born car industry was “imprisoned” for the production of trucks, buses and cars, Motorsport practically did not exist: simple cars are not enough. However, the creation of the first Soviet serial limousine ZIS-101, the production of which the Moscow plant began in 1936, prompted a group of young enthusiasts – engineers from ZIS, to the idea of creating of this advanced sports car.

Die-hard history of creation of ZIS 101A Sport

Anatoly Pehulin who graduated from evening department of MADI university on the theme of “Sport cars” worked on layout and the front suspension, his colleague Nikolai Pullmans solved the problem increase in engine power, Vladimir Kremenetsky worked on the design of the rear axle, and the artist-technician Vladimir Shoots “conjured” over the exterior of the future Roadster. By 1938, the ZIS 101A Sport was completed at watman, in the drawings. Designer – Rostkov.

According to Rostkov’s sketches, the templates with all the “curves” were drawn on a scale of 1:1, wooden parts were made on the templates for assembling the layout and then iron sheets of the upcoming body were made by hands and mallets. Frame was assembled from wood using a variety of bars of beech and other high-quality wood-according to the then ingrained technology. After complete assembly, the car was painted in dark green and finished with chrome trims. On the right side of the hood installed a commemorative plate with “XX years of the Komsomol” letters. 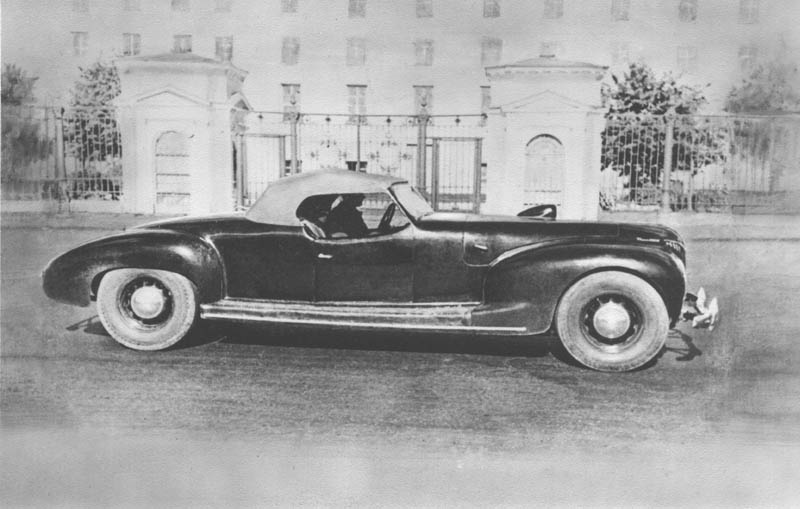 The official date of “birth” ZIS-101A-Sport can be considered a December 11, 1938, when the Director of the plant I. Likhachev signed the order, where literally days were painted with a timetable for the creation of a sports car. The legendary “red Director” personally controlled the progress of work, instantly eliminating all the “organizational” and “supply” issues that could prevent the implementation of such a responsible and “politically significant” project.

In the beginning most part of a project was made in the evening after working day was over. The guys from ZIL factory helped with implementation of this project especially chassis and body shapes. Work was steady but slowly without any big support …until…

…another loud event – the XXth anniversary of the Komsomol. In a long list of gifts to the Motherland, and eventually ZIS-101A Sport was among this list. October 17, 1938 “Komsomolskaya Pravda” published a note that “sports limousine” with one of the sketches of Rostkov. The country learned about the gift, talked about the gift, it was too late to retreat. But the car was half way to be ready. On 11th December 1938 Likhachev issued the order N11, where it was painted in detail the who, what and when should make for a sporty limousine. Development of the sports car design, for the first time in the history of the USSR, was controlled almost at the highest level. After all from ZIS-101A Sport depended very much, and everyone understood this. Finally, the first departure took place on a fully assembled, painted, polished car. Pullman was sitting behind the wheel, near Puhelin. Young Komsomol members did not know yet that it is not only their first, but also the last car… 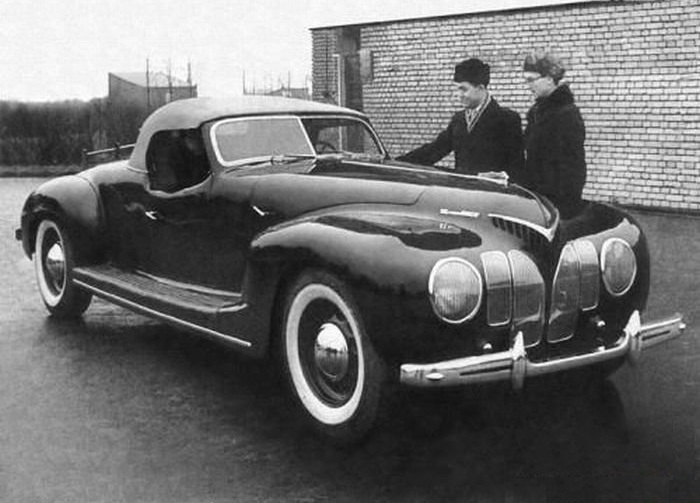 One pure morning the car disappeared from the factory. A piece of the wall of the house of Unions was demolished, where the XXth show was scheduled, a two-ton car was brought into the foyer, and even before dawn, the facade restored! They knew how to work, when need to! The operation was led personally by the Director of ZIS Ivan Alekseevich Likhachev. In the morning, none of the delegates and guests of the Moscow party conference passed by the car without paying attention to it. But the main thing: Joseph Stalin himself, and behind him and other members of the Party not only inspected, but also approved an unusual car. But the young designers were primarily concerned about the speed trials. So far it has been possible to develop only 168 km/h during unofficial tests. In 1940, the ZIS-101A Sport on 43 kilometer of the Minsk highway was cranked up to 162,4 km/h, in the same 1940 outdoor ZIS-102 showed the result of 153 km/h. However, the design of 180 km/h was very real.

Power train of ZIS 101A Sport

The sports car was equipped with an in-line 8-cylinder forced engine from the ZIS-101 with a volume of slightly more than 6 liters, or rather 6.06, producing 141 HP at 3300 rpm, a 3-speed manual transmission and a novelty for that time — a MKZ-L2 carburetor with a falling stream. Compared with the production model, the engine power was increased by 21%.

To drive the leading (rear) wheels use a hypoid main gear (first in USSR at that time), and the basis for the design of the suspension were the sway bars. The brakes were mechanical, drum, with a vacuum booster. Although the maximum design speed was supposed to be about 180 km/h, in the summer of 1940 during the tests on Minsk highway the ZIS 101A Sport was able to accelerate no more than 162.4 km / h.

A prototype of the Roadster was demonstrated in 1939 to Stalin and Kaganovich during the XVII Moscow party Conference, where he earned the full approval of the top of the country. But this verdict did not help the unique car in its future destiny. The departure of the Director of the plant, the collapse of the team due to production needs and the war put an end to this project, and the only unique Soviet Roadster “disappeared in time and space.”

Some searchers-enthusiasts still hope to find this “hundred first”, but experts of the restoration center “Molotov Garage” decided to act differently, namely to recreate according to drawings Roadster. And in 2012, at the 20th anniversary Oldtimer Gallery in Crocus Expo, they exhibited the recreated ZIS-101A in all its splendor.

ZIS 101A Sport for Assetto Corsa is available

We are glad to present you the another legenrady USSR roadster from 1939 in Assetto Corsa. Since the original model is lost, and there is only one remake of this car in the world, we reproduced this car for virtual sim-racing, so you can feel it by yourself. FEEL THE RETRO! With love from USSR ^_^ 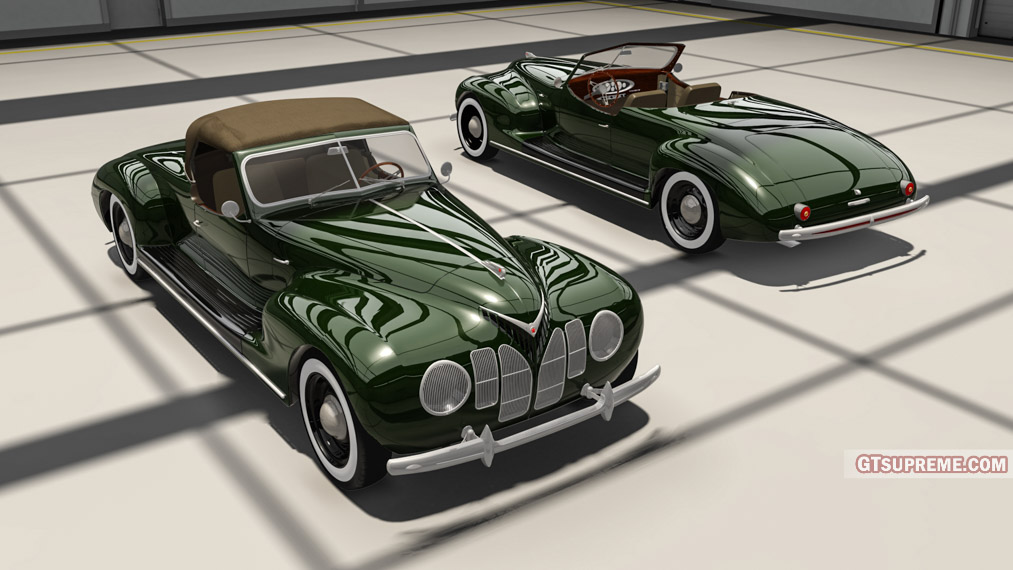