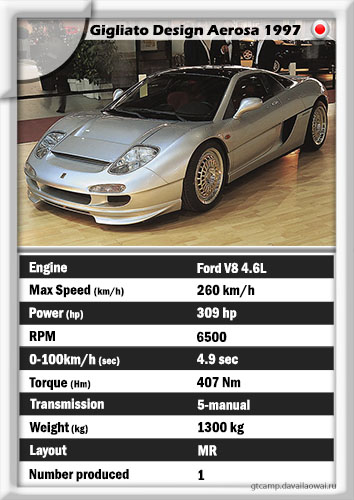 Gigliato Design presented a new Sport car on the 1997 Geneva Auto Show, the Aerosa. Automobili Lamborghini and Gigliato Design were to build this car as a Joint-venture between Japan and Europe. The engine was a special 4.8 Litre Ford Musting V8, pumping out enough horsepower for this small race car to arrive at 100 Km/h. in less than 5 seconds. The car would be entering several races through out Europe, Japan and the United States, were it should have posed quiet a threat to the McLaren F1 and Porsche GT1 race cars which dominated their classes. If this car would become a competitor for END_OF_DOCUMENT_TOKEN_TO_BE_REPLACED