Look. AZ-1 is a miniature of Ferrari F40, don’t you think so? It’s even same hard to find now, even harder then F40. AZ-1 was designed and manufactured by Suzuki but sold by Mazda under its Autozambrand. Debuted in October 1992 until and was noted for its gullwing doors. Suzuki produced its own badge engineered version named the Suzuki Cara (PG6SS). The car is also popular as a grey import in some markets, and has been converted to left-hand drive for the Canadian and other left hand drive markets. Designed by Tatsumi Fukunaga (Suzuki RS/3 – read below) and Toshiko Hirai (Design leader). Suzuki Cara END_OF_DOCUMENT_TOKEN_TO_BE_REPLACED

In the 1970s, Mazda developed the RX500, a dream supercar that amazed a multitude of car fans around the world. Developed by the research and design staff at the Toyo Kogyo Company and was a ‘mobile test bed for high-speed safety’ with forward-swinging butterfly-wing doors. Mazda RX-500 Concept features styling similar to the legendary Ferrari 250 GTO Breadvan. First shown to the public at the 1970 17th Tokyo Motor Show. The engine was heralded as being a production Wankel 12A, probably because the 12A engine was having its introduction in the Mazda Capella that same year. The car was repainted few times for promotional events. END_OF_DOCUMENT_TOKEN_TO_BE_REPLACED 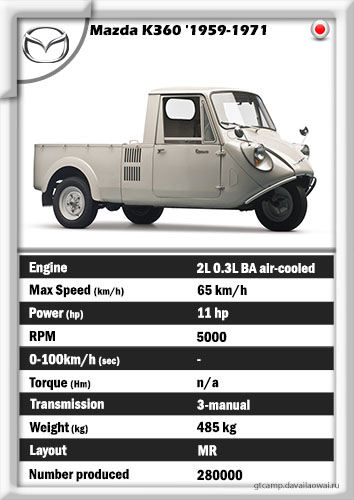 The Mazda K360 is a three-wheeled mini-truck K-car made by Mazda. It first went on sale in 1959 in Japan. It was the replacement for the Mazda Mazdago. Great rival to Daihatsu Midget 1 The three-wheeled small truck has been in development in Japan since the twenties, as it was ideally suited to the narrow and steep roads of that country, and it has grown to become the quintessential Japanese commercial vehicle, with millions produced by virtually every manufacturer. The Daihatsu Midget, the Mitsubishi Pet, the Humbee, the Cony, the Giant, and the Kurogane three-wheelers were already being built in a bewildering variety of body END_OF_DOCUMENT_TOKEN_TO_BE_REPLACED