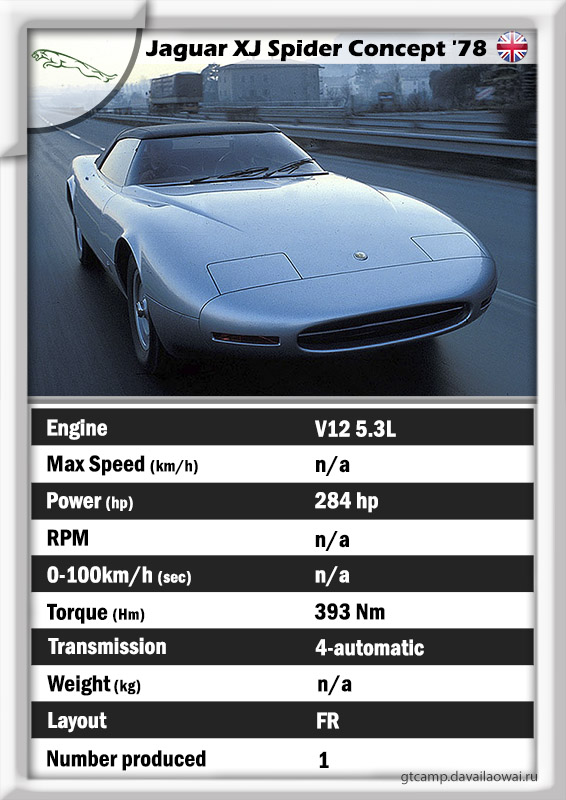 XJ Spider designed by Pininfarina for the 1978 British Motor Show – stimulated Jaguar to seriously explore the idea of an ‘F-type’ spiritual successor.

With underpinnings in place, the formidable trio of Leonardo Fioravanti, Sergio Pininfarina and Renzo Carli went about designing the bodywork. They reverted to the oval-shaped front air-intake of the E-type, and dropped the sober lines of the XJ-S in favour of the more bulbous curves of the original – including the swooping arcs which peaked above the wheels. The three also gave the car a huge boot to maximise grand touring potential, but this led to a side profile remarkably reminiscent of the same generation Corvette. Though perhaps this was intentional; after all, Jaguar wanted to break into the American market, and what better way to do it?

Making its debut at the British Motor Show in 1978 (incidentally the first held in Birmingham’s N.E.C.), the XJ Spider took full advantage of that year’s record-breaking attendance of over 900,000. Public reception was good, and this led to Jaguar developing a series of prototypes at Browns Lane, which went by the XJ41 (coupé/targa) and XJ42 (convertible) internal codenames.

These experimental cars took many cues from the Pininfarina car, but also addressed the Corvette-esque rear end and replaced the square pop-up headlights with oval ones – a feature later used on the XJ220.

It may have had styling too American for a Jaguar, but the XJ Spider concept very nearly inspired a car which had a chance of becoming a proper E-type successor, had Jaguar been more focused in the XJ41/42’s development.