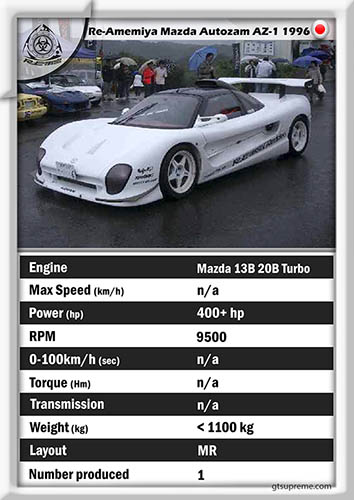 It’s basically a widebody Autozam AZ-1 with a longitudinal mid-engine RE Amemiya-tuned Mazda 20B rotary. It was built as a show car for the 1996 Tokyo Auto Salon, but I hear it’s far from being all bark and no bite. It looked RED before the current owner repainted and overhauled it in 2000. It, allegedly, originally had the Ferrari F40’s brakes and the Porsche 962C’s transmission, differential and shocks. That was Japan before their economic bubbleburst for you. When it was updated in 2000, it was given bigger tires, a slightly wider rear and brakes taken from the Ferrari F50. In 1996, renowned tuning company END_OF_DOCUMENT_TOKEN_TO_BE_REPLACED

Another great swap variation from RE-Amemiya 雨宫 (рус-храм дождя) – japanese remake of Lotus Europa. I think it’s the best Europa i ever seen. Powere by 13B Rotary trubo engine from 2-nd gen RX-7, fitted with RE Amemiya custom interior, 4 point seat belts, Tires: Yokohama(F205/50R16 R245/45R/16) What else do we know about this model? Only that it sounds like a Rotary monster and looks even better. As you see it’s also black one…or it was just repainted from vine red. SPL Europa 1991 gallery END_OF_DOCUMENT_TOKEN_TO_BE_REPLACED

RE-Amemiya 雨宫 (рус-храм дождя) whish is infamous for totary beasts tuning like FD far in past showed this bombing concept car! RE-Amemiya Bomex Todawas showed up in 1988 on Tokyo Auto Salon. What is this car aboot? Well, Actually it’s based on tiny Honda Today K-car, but powered with 12A rotary engine from 1st gen of Mazda RX-7 SA22C/FB. Other underhood parts took from 2nd gen FC3S. It looks as beautifull as other well made Japanese DIY cars, trying to copy the charm of Porsche 911 or other retro cars. Moreover this BOMEX Re-Today has gull-wing doors, and in combination with wide side pannels, it END_OF_DOCUMENT_TOKEN_TO_BE_REPLACED