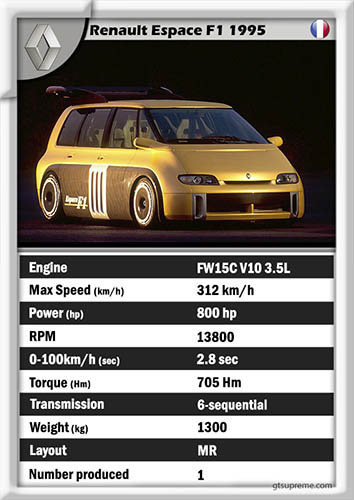 In 1995, Renault displayed a show car called the Espace F1, which was created by Matra to celebrate both the 10th anniversary of the Espace and Renault’s involvement in Formula One racing. Though it resembled an Espace with substantial bodywork changes, the vehicle had more in common with a Formula One car. The vehicle used a lightweight carbon fibre F1-style chassis in combination with a carbon fibre-reinforced Espace J63-series body (as opposed to fibreglass on the standard model). Powering the Espace F1 was an 800 hp (upgraded from its original rating of 700 hp) 3.5-litre, 40-valve Renault RS5 V10 engine, as used in the 1993 END_OF_DOCUMENT_TOKEN_TO_BE_REPLACED