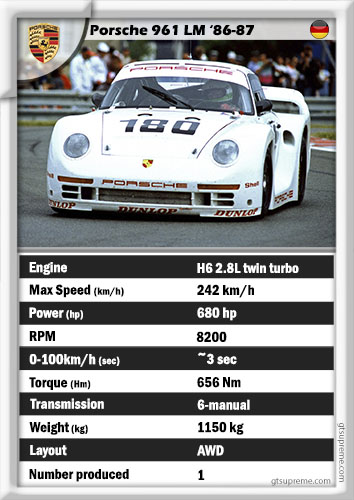 Although Porsche were developing 959’s for the Paris-Dakar Rally, the Stuttgart manufacturer harboured a desire for their flagship model to race at Le Mans – an event upon which so much of the firms status was based. For 1986, a crack factory built car known as the 961 was prepared on chassis 10016. It was debuted at the annual Le Mans practice day where Rene Metge easily pre-qualified. An all-French driver line-up would be back for the race in June, the 961 running in its own invitational class (IMSA GTX). It was powered by a twin turbocharged engine to more or less Group C spec, END_OF_DOCUMENT_TOKEN_TO_BE_REPLACED 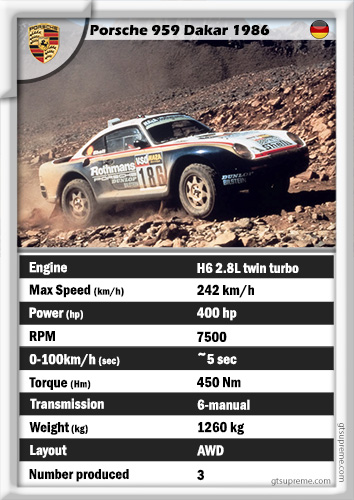 959 was designed to comply with FIA Group B regulations. In theory, it could compete with other Group B rally cars like Audi Quattro Sport, Lancia Delta S4 and Peugeot 205 T16 in the World Rally Championship, which was the most exciting and most sophisticated rally category ever appeared. However, Porsche did not do that, it just entered 959 in the less competitive Paris-Dakar rally. Why ? Compare with those fabulous Group B rally cars, 959 was obviously too heavy and too big. For example, the Delta S4 weighed just 890 kg, powered by a 1.7-litre turbocharged plus supercharged engine capable of 470 hp in END_OF_DOCUMENT_TOKEN_TO_BE_REPLACED

Great rival to RUF Yellowbird or best was made in past First, who are Lanzante? It’s a great team who won 1995 Le Mans race with Mclaren F1, and since then they tune Mcs in England. Lanzante 930 Turbo is great swap project, maybe best in the world, because swap is made on mother-porsche engine (not bla-bla-JZ one xD). The ENGINE Back in the 1980s, Porsche supplied twin-turbo V6 Formula 1 engines to the McLaren Formula 1 team under the TAG brand name. A single Porsche 930 was built with this engine, unmodified from F1 spec as a test mule. That car, mostly stock from END_OF_DOCUMENT_TOKEN_TO_BE_REPLACED

The legendary win of Porsche was a result of hard and persistent work of Porsche System Engineering and their drivers such as Jo Bonnier and Dan Gurney. Remark: Porsche 804 was created and firstly tested in 1961 (!) but officially raced from 1962. Super short overview: The path to win started in 1957 through Formula 2 series which was allowed to start with Formumal 1 cars on 4th of August 1957 at Nürburgring. Finally the idea of super light 550 was evolved to 718 close-wheels coupe and finally to 718/2 and 787 monoposte (open-wheel – italia), and finally Porsche 804 was firstly tested on Nordschleife END_OF_DOCUMENT_TOKEN_TO_BE_REPLACED 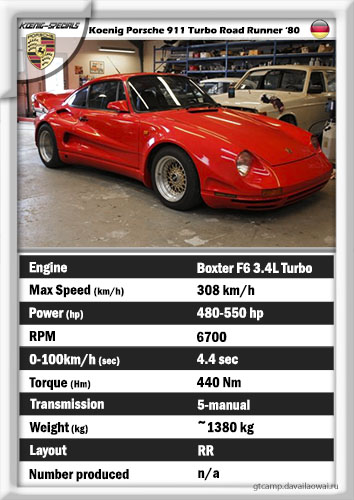 Koenig-Specials, the tuner from Munich that had shocked the car-minded world with turbo-charged Ferrari 512BBs and Testarossas, didn’t just play with the Italian horse. By the mid 80s Willi König had a complete range for cars like the Jaguar XJS, Mercedes S-class and the Porsche 911…. The latter was tuned in several different ways, but the most extreme version available (and the only one we’re interested in) was the so called “Porsche 911 Turbo Road Runner“. Based on the Porsche 911 (930) Turbo, Koenig-Specials’ version of the 911 was fitted with a rather extreme widebody kit made from glass-fibre, which included new bodywork all around: END_OF_DOCUMENT_TOKEN_TO_BE_REPLACED

996 featured the most significant changes to the Carrera model since its 1963 introduction. That’s why i focus on this model. Moreover it looks just simply sexy. This atmo-aspirated model was featured in “Gone in 60 seconds” remake movie and called “Tina”. Among 996 models, this one is not vety common. Thing is new turbo model was intorduced in 2000, also called 996. BUT turbo models had…not pretty head light at all. It was a big stem away from icon shapes. Even N/A model had this feature, however it looks more delightfull. Yes, for this reason i love it more. The Porsche 996 was an END_OF_DOCUMENT_TOKEN_TO_BE_REPLACED

When 356 production ended and was replaced in the market by the 911/912 pair, nearly everyone wanted to know when Porsche would again produce an open air version of their new sports coupe. Looking to meet this demand, dealer and importer Johnny Von Neumann teamed with Italian design house Bertone to create a drop-top Porsche. Von Neumann felt that developing the new-for-’66 911 Targa would not be enough for the fickle and volatile California market (who were pestering him for a roadster/speedster/spyder replacement of some kind). In speaking with Porsche about this problem, Von Neumann was approved for release of a single chassis. This 911 END_OF_DOCUMENT_TOKEN_TO_BE_REPLACED