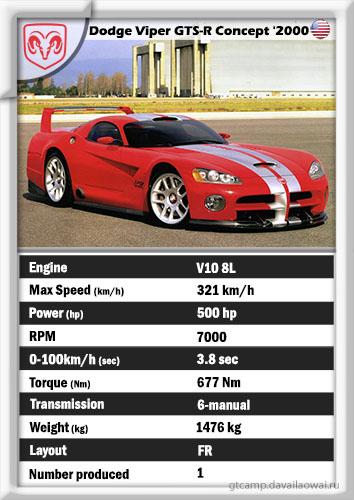 Ten years after the first Viper Concept was revealed, the 2000 GTS-R concept continued the legacy of the V10 Viper. Osamu Shikado was responsible for the vehicles exterior which is 3 inches lower and 2 inches wider than the production Viper at the time. Shikado used race inspired lines with an aggressive stance to create the most striking viper to date. Some of these design cues, to a lesser extent, have been landed to the 2003 production Viper. Said Shikado: We gave the body a strong profile with higher belt line, dramatic side gill, ‘bump-up’ rear fender shape and a more defined side crease. Seen END_OF_DOCUMENT_TOKEN_TO_BE_REPLACED

A coupe model called the GTS was introduced in 1996. 6796 Coupes & 3626 Roadsters (RT/10) have been produced. Dubbed “double bubble”, the roof featured slightly raised sections above each seat to accommodate usage of helmets, a throwback to its intended purpose, taking design cues from the Pete Brock designed Shelby Daytona. The GTS, like its predecessor, was chosen as the pace car for the 1996 Indianapolis 500. Despite its similar outward appearance, the car was distinct enough to be considered a new generation model. Differnces with First Gen Viper. The GTS would come with the same 8.0 liter V-10 engine but power would be END_OF_DOCUMENT_TOKEN_TO_BE_REPLACED

It’s more then classical Muscle car, much more. Created during “golden age” of design in 1992 by Tom Gale, who is also notable for Plymouth Prowler. The centerpiece of the car was its engine. Lamborghini, then owned by Chrysler Corporation, designed the V10 for the Viper by recasting the block and heads in an aluminum alloy, and was based on the Chrysler LA V8 engine. A major contributor to the Viper since the beginning was Dick Winkles, the chief power engineer, who had spent time in Italy. Viper debut The first prototype was tested in January 1989.I was in love in this car since END_OF_DOCUMENT_TOKEN_TO_BE_REPLACED