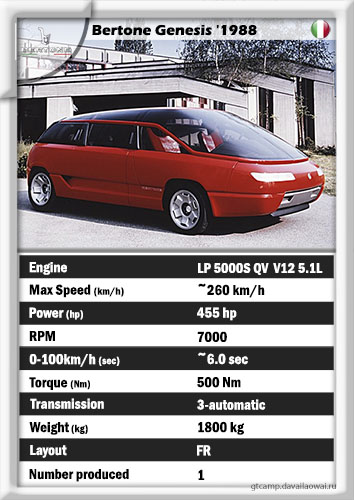 Fruit of the creative expertise of the Caprie Style Centre, the Genesis is a prototype for the car of the future, presented at the 1988 Turin Motor Show (April 21). The Bertone Genesis or sometimes referred to as the Lamborghini Genesis was a Bertone designed concept car using Lamborghini parts. Designed by Marc Deschamps with his team, chief designer of Centro Stile Bertone. It took them 30.000 human/hours. The Genesis interprets the search for a new dimension for the automobile, entrusted more to the imagination than to the technical and design tendencies of the day. This model is a people-carrier for four to six passengers, END_OF_DOCUMENT_TOKEN_TO_BE_REPLACED

When 356 production ended and was replaced in the market by the 911/912 pair, nearly everyone wanted to know when Porsche would again produce an open air version of their new sports coupe. Looking to meet this demand, dealer and importer Johnny Von Neumann teamed with Italian design house Bertone to create a drop-top Porsche. Von Neumann felt that developing the new-for-’66 911 Targa would not be enough for the fickle and volatile California market (who were pestering him for a roadster/speedster/spyder replacement of some kind). In speaking with Porsche about this problem, Von Neumann was approved for release of a single chassis. This 911 END_OF_DOCUMENT_TOKEN_TO_BE_REPLACED