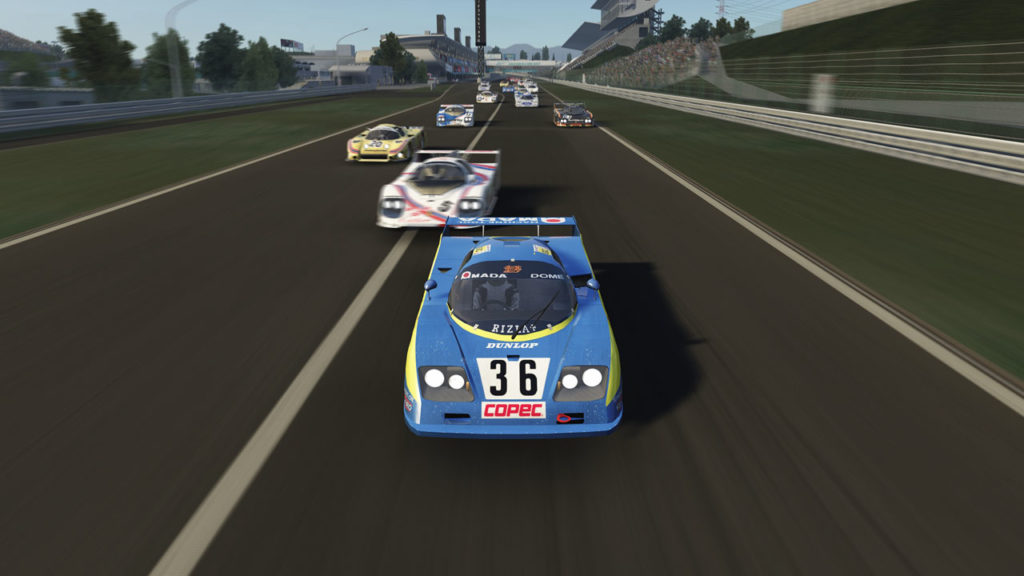 It will be around 20 cars. One-two cars will be released each week and will be on my Patreon page.

1 – played big attention to make cars competitive to each other, to have good play with friends or with Ai.

6 – Shaders of body to make car look cpmfortable for eyes.

7 – All cars will have rain FX support and rain tyres when pack is finished – car released before 27.01.2021 have update in post here

2 – No shifting animation in release version of the cars.

About competitiveness of the mod. Cars have + – competitive characteristics. Compare to late Group C (Porsche 962, Mazda 787B) they have a bit less power. On the other aspects, unfortunately none of us drove thiese cars in real life, but i liked the result.

Porsche and Ford were first to join Group C regulations. It was Ford C100 (presented in this pack) and Porsche 956 (will be publiched later). Today we have chance to experience Porsche 936C! In an attempt to conform to the new Group C regulations, Joest racing built new bodyshapes that incorporated a roof onto their 936-replicas Joest’s car was designated as 936C JR005. 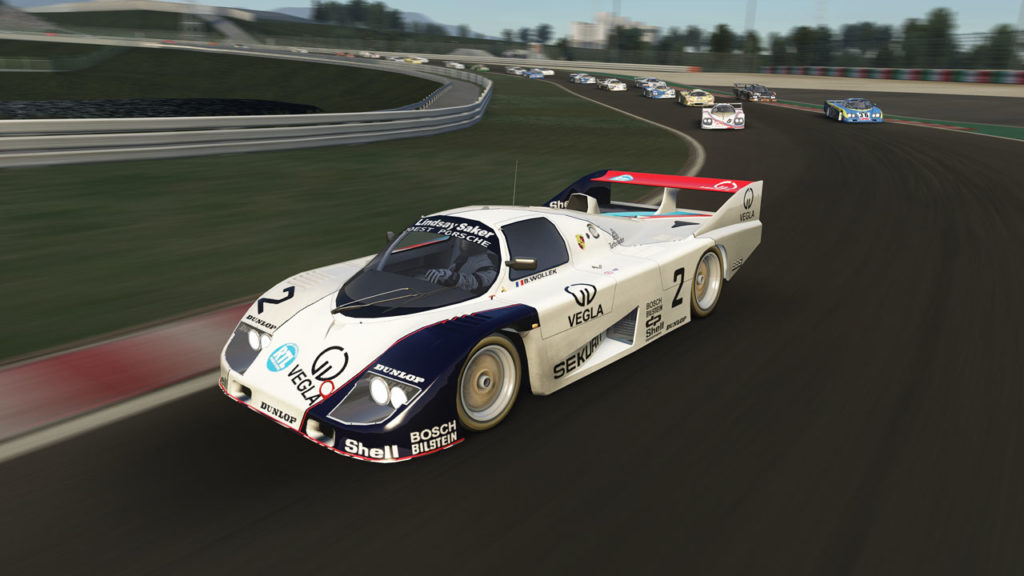 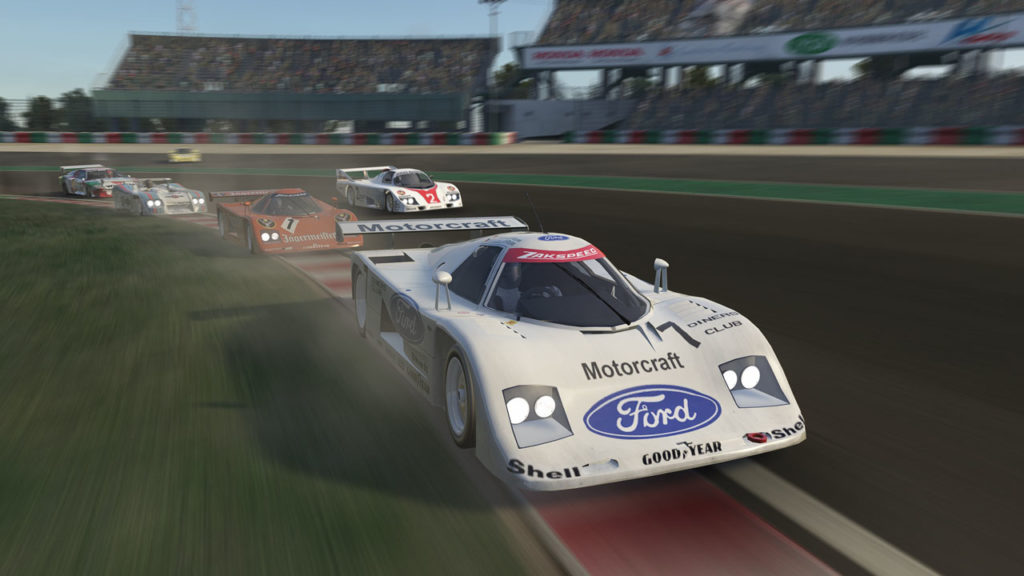 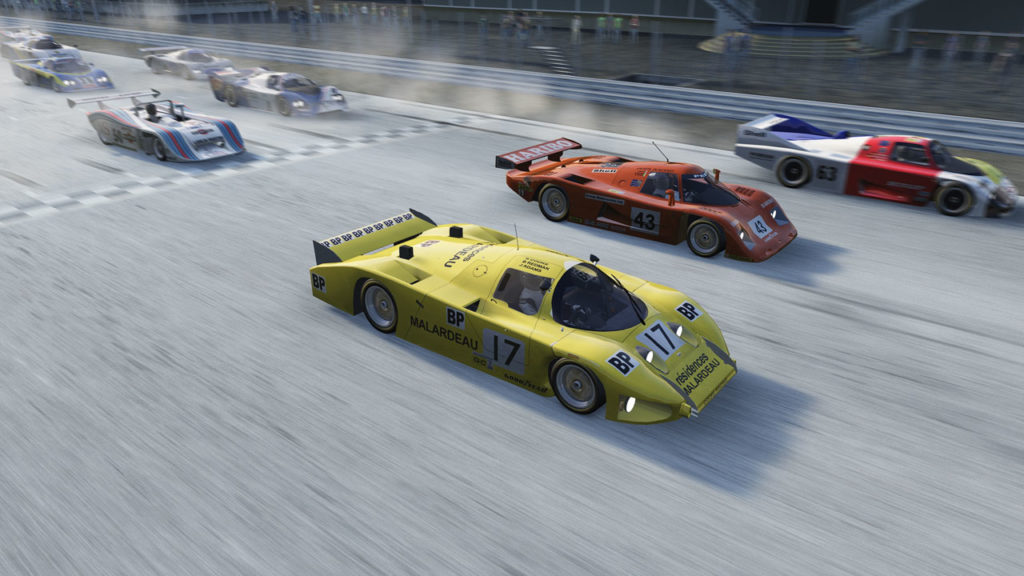 What about you? Lola is still a Lola, beautifull, well-shaped, with Ford natural aspirated engine.

It has zero racing success due to mechanical failures, but many other “C” cars were the same. But we can enjoy it in our sim.

About Lancia LC1 (chassis and model that came from Group 6 series) – physics of this car feels much more different from other Group C cars. her strong points are: ~200 kg ligher, better handling…..BUT her weak point is: maximum speed (it’s not fantasy, all according real data i found about this car)

Basically it’s Group 6 prototype, which was changed by “C” in 1982 with new regulations.

I just can not imagine what driver felt driving old “spyder” chassis among new Group C monsters! Metal balls for sure. 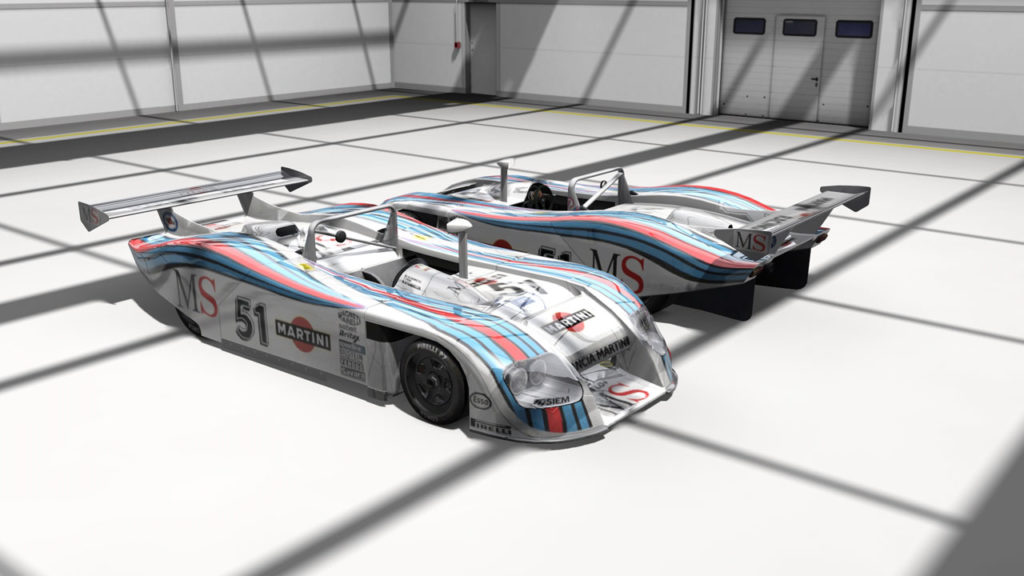 Unfortunately both cars retired in 1982 24h of LeMan…but were 4th and 5th on the grid! 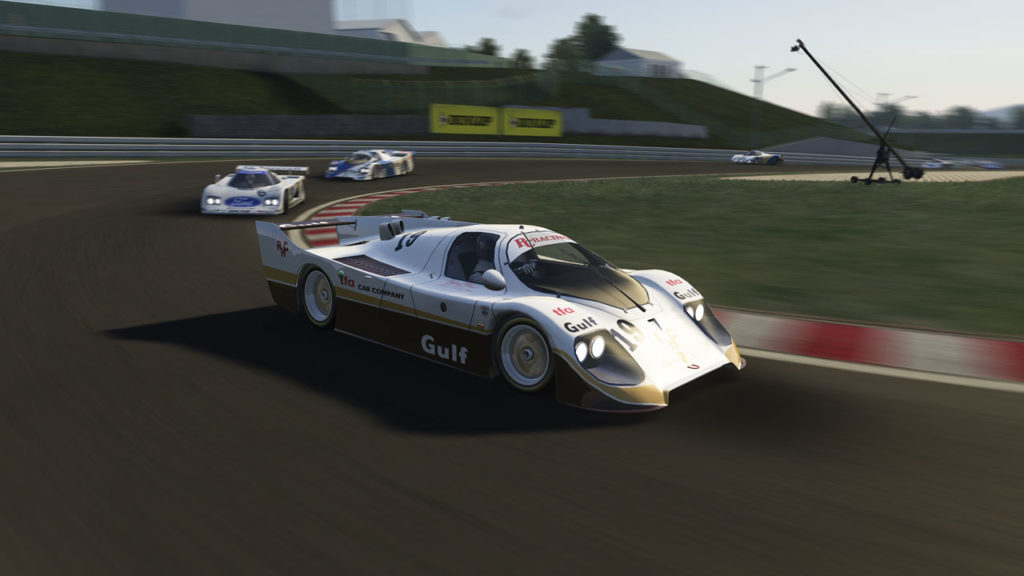 It has slight difference on front arch bodywork, compare to older chassis and probably one of the prettiest livery i ever seen with double-zero! 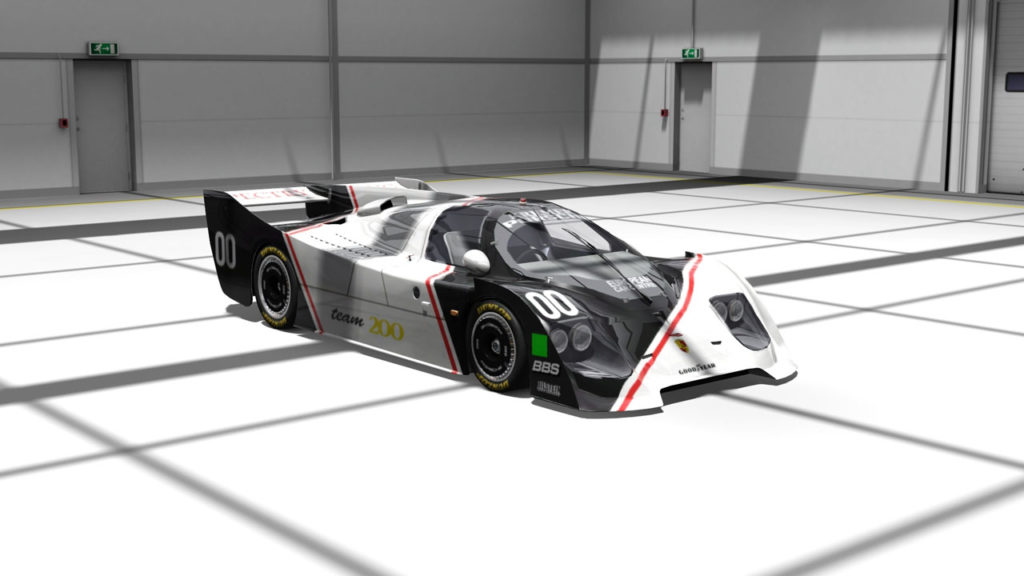 Also: “Chassis #001 and #002 are built from round Aluminum tubing, as was the 936, but chassis #003 is built from square steel tubing. The first two cars were originally built with a 917 gearbox but #003 was  built with a Hewland gearbox, probably both for cost and reliablilty  reasons.”

One day the #003 car was shipped to the USA around 1986 and raced by a gentleman named Norbert Przybilla. This livery took part in 27.11.1988 “GTE World Challenge of Tampa” event. Team started 16th, and finished 9th. Not bad! More race details here

Big thank to NeilB1971 for his efforts to make this version of the beauty!

WM Peugeot P82 and P83 (according the year produced). Wild German car, with high top speed, but tricky handling and downforce. It’s a good choise for high speed track for sure.

Same as most of Early Group C cars, this one did not have big success, but definetely was one of the diamonds on the grid. Good era of racing cars that looked different to each other! 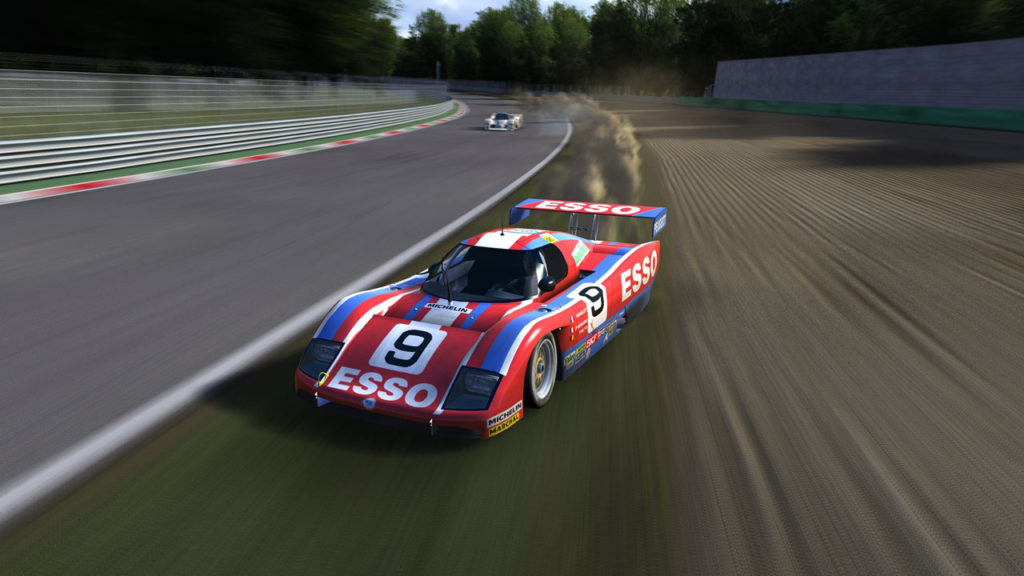 As highest stage of evolution of the WM P83 model is WM P86, here we go with 1986 year car configuration. Visually it has different rear wing.

*** Despite of high speed characteristics, model was unlucky in Le Mans racing ***

Another race car is a child of Giuseppe Rise and Ian Dawson – Grid S1. The name was about Super pole on the Grid, but it was not it real. Another well-shaped unique unicorn, with far from excellent results in racing. Simulator is best way to remember these rare prototypes from the past. 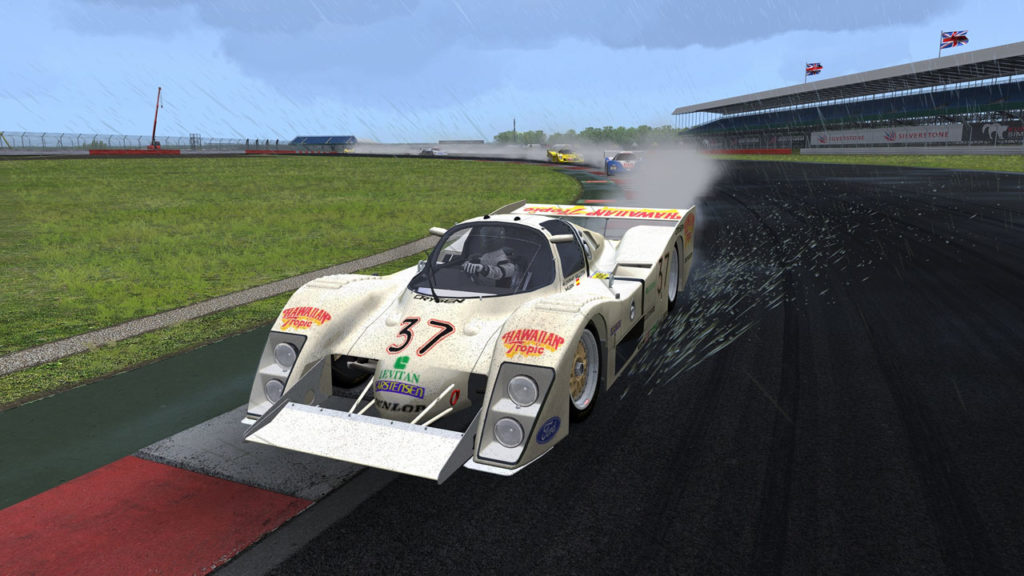 Mazda 717C made debut to prototypes with this big “toy” car in LeMan and won it easily! First place in Gr.C Junior class, 12th overall. Rotary powered beauty was as a next chapter of Mazda after racing LeMan in 1982 on Silhouette RX-7.

What is Group C Junior? This class was made by FIA to allow team with lower budget to take part in prototype class. Engines were 2-3 liter (Mazda rotor was 1.3 Wankel engine). Fuel tank was limited 50 lites (compare to 100 liters in gr.C class), power was also decreased because of it. Main point was fuel efficiency, and Japanese team made it perfectly.

Some say it could reach 300 km/h on Mulsane straight, but i doubt this car could do it, if you look at her lap time. Read more about 717C on Drivetribe 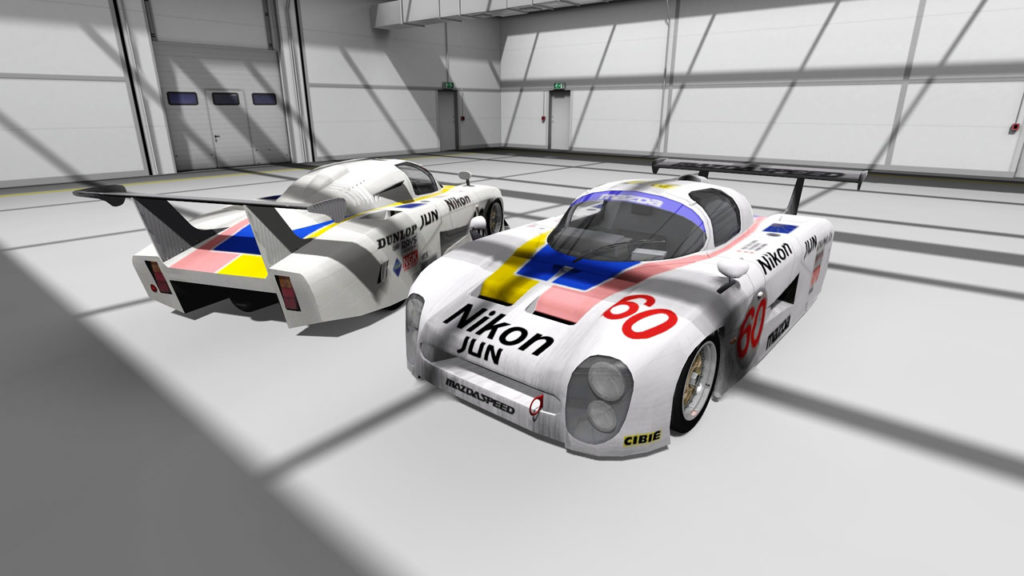 Anyway, it’s good car for beginning your Journey in Group C era and practice skills before moving to bigger cars.

Harrier RX83C Gr.C Junior. English bullet with rotary heart. Despite of huge potential, the car was not very successful in racing, except Spa race. But just see how pretty it is. Especially in Monza livery.

The RX83C was the brainchild of Englishman Lester Ray who, in the previous Group 6 era, had built the Vogue, a two liters sportscar raced mainly in UK. It was based on an aluminium sheet monocoque and was first equipped with a Mazda two rotor, carburetted, 13B engine. 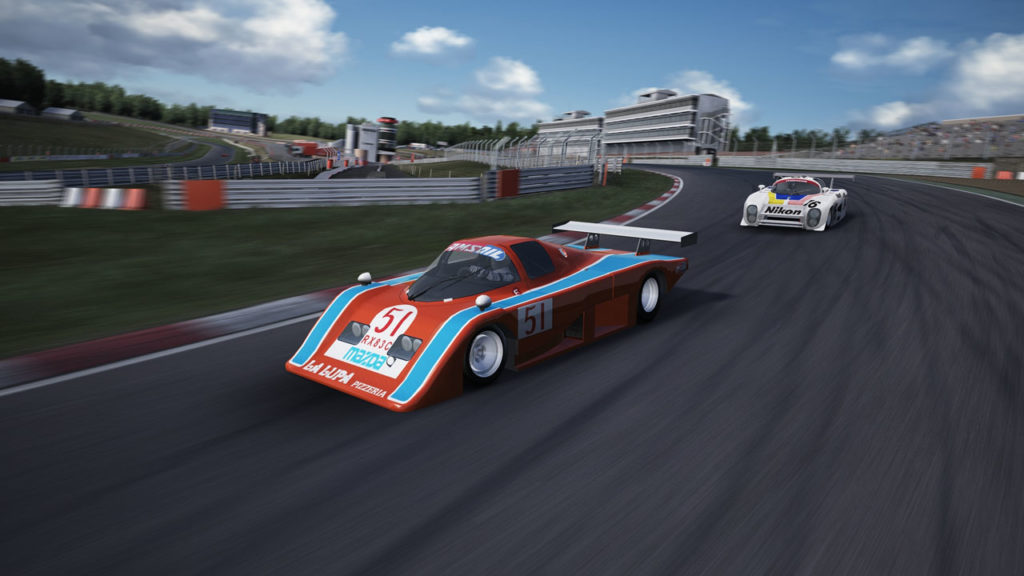 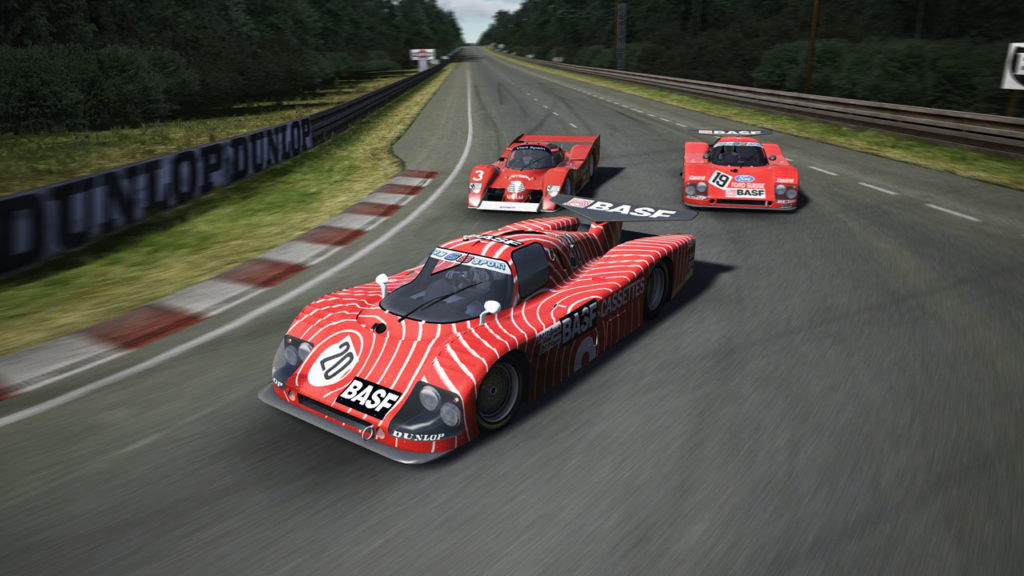 In 1985 Bassaler team bought the car, swapped to BMW M88 engine and participated in Group C Junior (C2) class. And even managed to finish. However results were very poor. 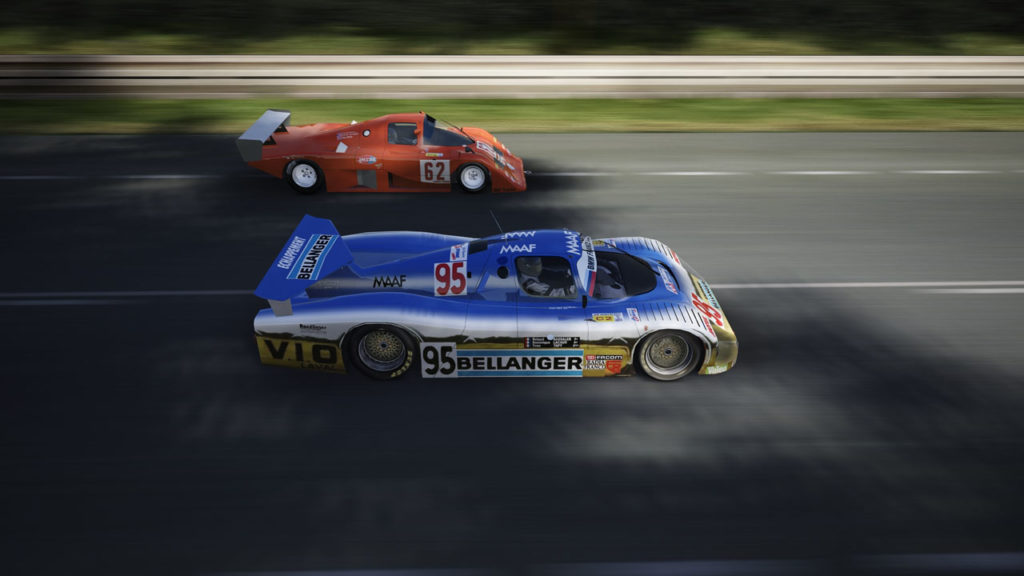 But we like it for crazy aero rear wing and good looking design.

As a bonus addition to Sauber SHS – here we go with rebranded version called SEHCAR C830. Mister Walter Brun bought one of SHS (chassis #03) to rule the party. But it was disaster the whole 1983. On LeMan car didn’t even start due to lack of preparation.

In 1984 it ran few races with another “great” result. What i do like about this outsider car is unusuall extra front wing and it was Powered by Porsche engine (same was on CK5 ’83). In sim i’ve enjoyed it more then original SHS. How about you? =)

Balanced Group 5 pack to race with Group C by other modders with my fix.

By the way, we already have most of the cars from that race in game! For me personally, i like to mix racing grid with DRM revival mod cars and Japanese Super Silhouettes. For the last one, here i upload Japanese silhouettes with my data fix for Japanese Skyline R30 (made by Lu Thua Kein) and  Bluebird (made by legion). Originally these two cars are 100% technically the same. But mods are made by diffrenet people are alway different. So i try to make it balanced to have a really good race with Ai and friends.

Can read about these cars, their racing achievements in CM car description.