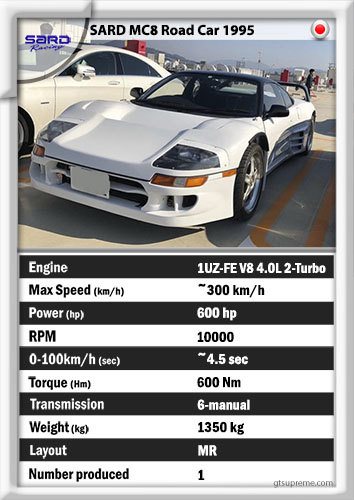 SARD (Sigma Advanced Research Development) is a company and race team in Toyota, Aichi, Japan specializing in Toyota parts and vehicles. Back in the ’90s they built several race car based on a Toyota MR2 SW20 called the MC8-R for Le Mans and Super GT. It competed from 1995-1997 but did not have a very successful career. To comply with homologation rules at the time, SARD built one road version of the race car in 1994 called the SARD MC8. The road version features lengthened chassis supporting a twin-turbo 4.0 L 1UZ-FE V8 estimated to make 600 horsepower (447 kW). The drivetrain uses a Porsche six-speed manual transmission END_OF_DOCUMENT_TOKEN_TO_BE_REPLACED