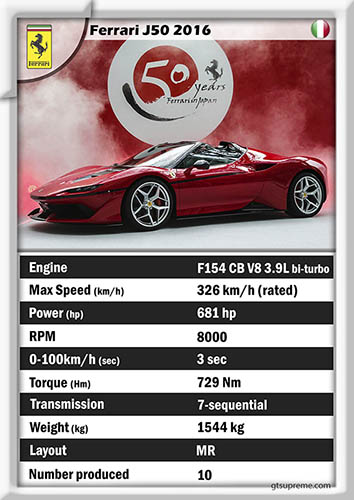 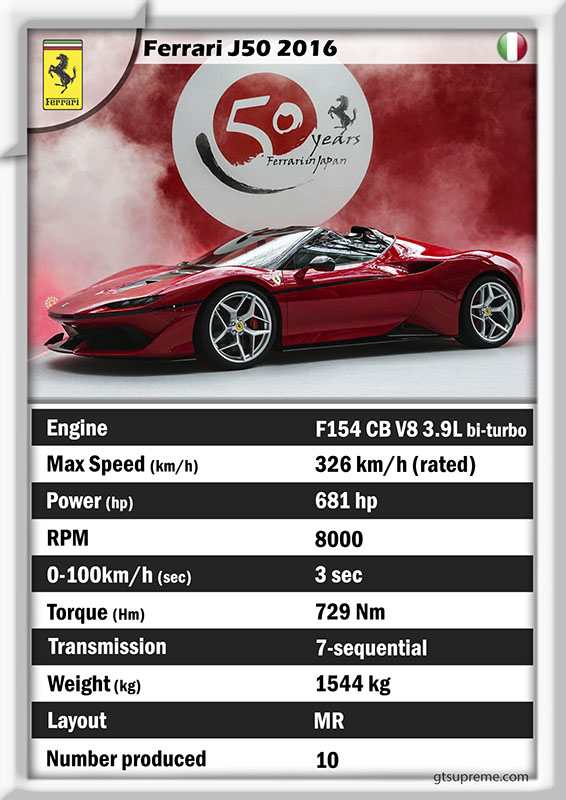 During a special celebration held at the National Art Center in Tokyo in 2016 to commemorate the 50th anniversary of Ferrari in Japan, Ferrari revealed a new strictly limited series of bespoke cars, the J50 (J is for Japan, 50 is for anniversary).

The Ferrari J50 is a two-seater, mid-rear-engined roadster that marks a return to the targa body style evocative of several well-loved Ferrari road cars of the 70s, 80s & 90s (golden age of auto-manufacturing). Designed by the Ferrari Styling Centre team in Maranello, just 10 examples of the J50 were built (Based on the 488 Spider) and, in the spirit of Ferrari’s fuori serie tradition, each one will be tailored specifically to the customer’s requirements.

J50 fitted with Twin-turbo Engine (also comes from Ferrari 488) that won the overall International Engine of the Year Award in 2016.

Black dividing line on the body is a novel interpretation of a recurring Ferrari styling cue seen on iconic models such as the GTO, F40 and F50. Circling around the front of the car below knee height, it is a key element which alters the perception of the beltline, setting it at a much lower height than usual, transforming the J50 into a targa. Isn’t it supreb?

What’s new? The radiators have been positioned closer together, and the front bumper has been completely redesigned. The windscreen header rail has been lowered allowing more airflow over the aero foil and thus over the rear spoiler. A transverse aero foil projects as a bridge between the hoops, effectively revisiting one of the most distinctive features of Ferrari sports prototypes of the 1960s.

This is the car that will stay unknown for most of people but will cost a fortune when time pass.