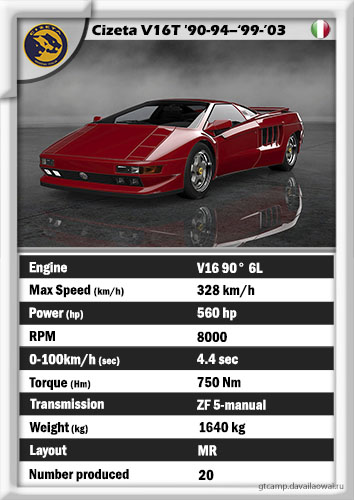 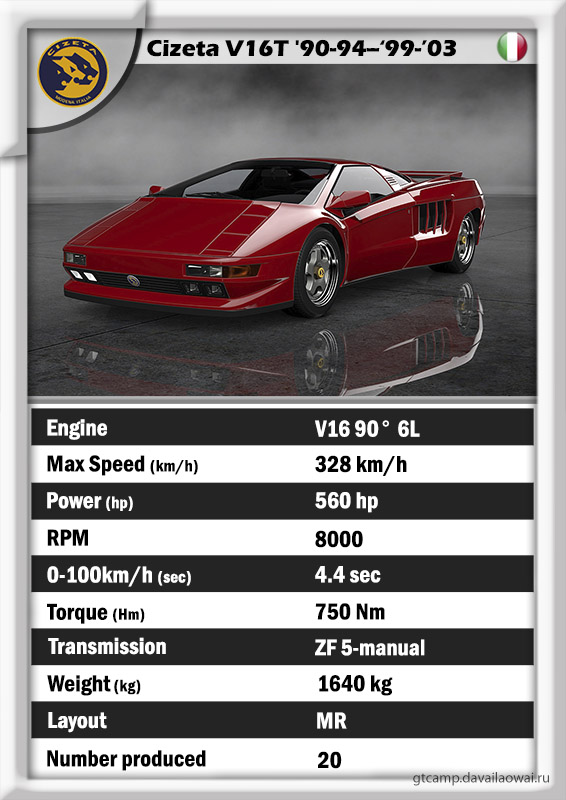 One of the best “hello” from golden era of automaking and autodesigning. The beast of a cars. King of kings. So, Who is she?

In the 1980s, the famous composer Giorgio Moroder, along with Claudio Zampolli, a wealthy exotic car dealer in America, began work together on a project that set out to build a supercar like no one had ever seen before. Their dream was to create an overwhelmingly fast car with a complex design, unprecedented in both exterior and interior style. Combining their names (Cizeta is Italian for C.Z., Zampolli’s initials), the two men decided to refer to their supercar as the Cizeta-Moroder.

To create a look worthy of such a supercar, Moroder and Zampolli turned to Marcello Gandini – a designer famous for his work on the Lamborghini Countach, De Tomaso Pantera Si and the Lancia Stratos, and this guaranteed the creation of a remarkable car.

The aggressive nose rises up to incorporate the huge windshields and roof, which rounds off to include the rear window, giving a bubbleshape to the rear of the greenhouse. The 7-slat side air intakes hint of Testarossa. Dual-stepped headlights give the car a necerrary eccentricity. 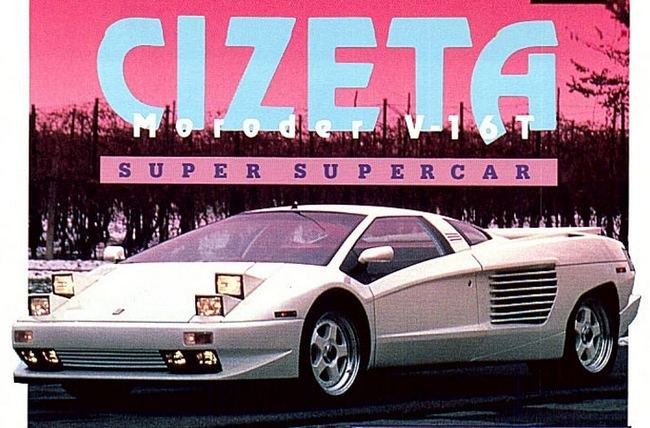 There is erroneous opinion that Cizeta Moroder looks like Diablo. NO! It is a Diablo who looks like Moroder. And i answer WHY? Initially Gandini made scathes of moroder and gave them to Lamborghini as future project of Diablo, but chiefs of Chrysler who owned Lambo that time refused it. So finally Gandini used the design of it for Moroder V16T.

♥ Debut of prototype at 1988 Geneva Auto Salon with enormous success

The heart of the Moroder is V16 atmo engine – result of combining two 3.0L V8 from Lamborghini Jalpa, connected one after the other by one common crankshaft. Interesting is that the engine in the car is located transversely! Because of this, the width of Moroder has exceeded 2 meters. And T in the name goes for “Transverse” – V16T.

The Ford made gearbox is installed longitudinally. As a result of which the power unit itself looks like letter T.

Disc brakes on all wheels are shared in the company Brembo. No ABS, as well as other electronic assistants. True hardcore hypercar.

What does Cizeta logo mean?

The brand logo was designed by Giorgio Moroder, it depicts three profiles of the wolf’s head. While developinf of the logo, The composer was inspired by ancient Roman history. It was the she-wolf, later called Capitoline, who saved life and nurtured Romulus and Remus, the orphans who founded Rome.

It is believed that the three wolf’s profiles symbolize the three creators of this machine: Claudio Dzampolli, Giorgio Moroder and Marcello Gandini. Blue and yellow colors on the logo are the colors of the flag of Modena, where the company was located.

What else you can know about Cizeta?

Bankcrupcy: Mr. Zampolli moved to the US after the company went bankrupt in Italy in 1994 and has set up a new company in California, called Cizeta Automobili USA. Only three were made (including Spider) before second bankrupcy occured in 2003. Since that time there is no more Cizetas have been produced.

Sultan of Brunei – main sponsor: Three cars Cizeta V16T Moroder were bought by the Sultan of Brunei. The very first car painted in black color with a black leather interior was sent to the Sultan’s garage in 1991. The car featured with right steering position. The second Moroder of three purchased by Sultan, was the fifth produced car. It also featured the right-hand steering wheel and black leather interior. For some unknown reason, after some time, according to the owners, the gearbox has broken. Although Mr. Zampolli claims that he did not receive any complaints or claims against the car from the family. In addition, Claudio Zampolli gave a lifetime warranty on the engine and gearbox (and all the mechanics). The Sultan, who at that time collaborated with Pininfarin’s studio, which in those years had built several unique Ferrari, commissioned the repair of the machine to their specialists. At first the engine tried to set with the gearbox from the Ferrari 512M. But it turned out to be constructively impossible, and therefore the specialists of Pininfarina replaced all the original power unit =( The compact, opposed 12-cylinder Ferrari engine took up much less space in the under-hood space. Then came the economic crisis of 90-x, the Sultan of Brunei had financial problems. And as a result of selling part of its collection, this Chizeta came to States to the automobile museum of Dick Marconi. The last of the three cars ordered by the Sultan of Brunei, the sixth produced Cizeta, was a dark blue color, with a right-hand drive and had a blue leather interior. Due to the financial problems of the owner, this car was also sold and is currently MIGHT BE in New Zealand.

made with Love. Power, engine, and other specs according real data. Physics was based on Diablo by a3dr with some edit. Working four pop-up head lights. Tires: semislicks, Street, Street 90′.

Car is done and ready to race. Feels just amazing. Thanks to very wide track and very wide rear wheels, feelings can not be described, how much pleasure and joy Cizeta V16T gives to you.

Donate via PayPal for futher development if you are interested in this beauty. Thank you.