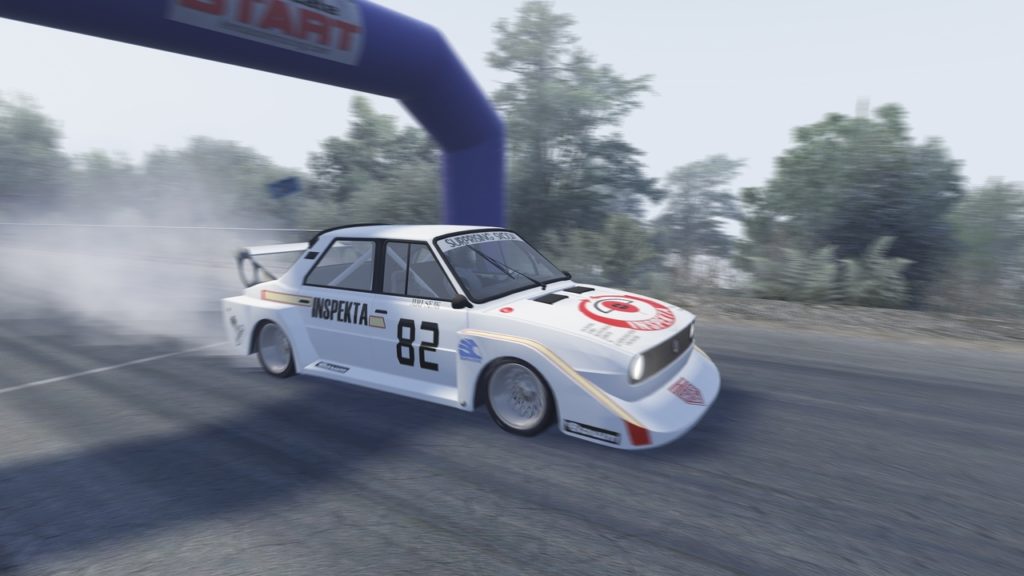 “Your best choise to learn Group C and Super Silhouette in racing Sim is this tiny 120L Dakos.”

“It’s not the beasty machine as classic top DRMs, but light and snitchy ride born for hillclimbes and downhills.”

The Škoda brand had a good reputation on European racetracks at the turn of the 1970s and 1980s, so non-factory riders who could not ride the magnificent Škoda 130RS (Assetto Corsa mod by TM team) were looking for adequate sports “equipment” with which to compete with their heads held high. Skoda cars newly manufactured engine series 742.

Skillful Czech hands then gave rise to many interesting and competitive cars, with which our pilots often bothered opponents with much more advanced cars and better financial and technological background. One of the most remarkable machines built on the basis of the Š742 is the Škoda 120L DAKOS, driver Jiří Sejk. The car participated in hill climbs and road races in the A5-silhouette category

The racing team led by Jiří Sejk and Ivan Matoušek was eager to rebuild the Škoda 120L at the end of the 1970s. The original intention to modify the Škoda for racing purposes and to try out some innovative technical solutions eventually, despite the limited financial resources and achievable technology, grew into such an extensive reconstruction that a completely new car was created, which also required a new name – DAKOS. This name was created simply by “shuffling” the letters in the word Skoda.

The A5 group at the time provided a wide range of modifications, one of the main limitations was the observance of the shape of the silhouette of the body and the shape of the door. The designers of the team met the conditions without losing a flower, although the aerodynamics and technique of the Škoda were fundamentally reworked.

As the popular saying of car modifiers says: “It’s better to lose ten kilos than to add ten horses.” Ideally, it’s a good idea to do both, as DAKOS designers have just done. The body of the Škoda 120L was freed from all unnecessary things. They took over all the insulation, the interior of the car, the soundproofing and damping elements, all the removable elements of the body and glass.

The front of the car was made of fiberglass. In the spoiler, which increases the pressure on the front axle, holes for air supply to cool the brakes have been integrated, but for uphill races, these holes have been blinded so as not to disturb aerodynamics. The front fenders, front, spoiler and hood were made in one piece. The whole bow bonnet weighed only 17 kilograms!

The rear fender extensions were made of the same material. Because the regulations for group A5 strictly insisted on maintaining the shape of the door, the extended front and rear fenders were connected by an extension at the level of the sills to reduce turbulence. Ventilation openings were located in the superstructures of all fenders, which reduced the vacuum in the underbody and further improved the air flow around the car.

For further relief, the covers of all four doors and the rear bonnet were manually knocked out of 0.6 mm thick aluminum sheet. The rear door handles and locks on the front doors have been removed. All windows except the front one were glazed with macrolon. One of the front wipers disappeared and the other was modified as central. Thanks to these measures, the total weight of the car was reduced to a remarkable 665kg (A5 regulations required at least 635kg).

A significant contribution to the car’s aerodynamics was the installation of a pair of rear spoilers, which significantly increased the pressure in the rear of the car. The most visible, of course, was the large wing on the rear hood, which was made of duralumin sheet, connected at the trailing edge by rivets. The designers of the team made the wing as adjustable, so that the pressure could be changed according to the specific conditions of each race.

However, the wing itself would never develop the necessary downforce due to the characteristic shape of the Škoda body, so it was supplemented by a plastic spoiler on the rear window, which directed the flow of air above the car at a considerable angle to the rear wing.

The dimensions of the car thus became truly impressive, and even the standing DAKOS aroused respect by its mere appearance. Thanks to the modifications, the width of the car increased to a respectable 1900 mm, the height was 1260 mm. The wheelbase at the front has been extended to 1435mm and at the rear even to 1620mm. Thanks to the front spoiler, which made extensive use of the permitted dimensions of the overlaps, the length of the car increased to 4360 mm.

The skeleton itself was modified by the installation of a steel tubular frame. In addition to the requirements of the regulations for group A5, the frame was supplemented with longitudinal reinforcements, which increased the safety of the rider, surrounded by a soft body with laminate and aluminum panels. A total of 17.5 m of seamless steel pipes were accommodated in the interior. Parts of the frame around the driver have been lined with foam sleeves for safety reasons. The fuel tank was made new for DAKOS, with a volume of 10 liters, which was a value sufficient for the needs of the uphill races. The tank was placed in place of the existing tank under the removed rear seats. As the regulations required the safety design of tanks up to a volume of 20 liters, this tank was designed as simple, without safety features. A larger safety tank was used for the circuit races. The skeleton was supplemented by the distribution of 10 mm pipes of the fire extinguishing system with chlorobromomethane filling (CB). The fire extinguishing system was located in the driver’s booth

The rider’s seat was anatomical, safety, with shoulder pads and was equipped with six-point REPA belts from the then “West” Germany. In addition to the standard instruments, the rider also had a rear brake pressure limiter control available in the simplified instrument panel, thanks to which he could regulate the force of the rear brakes at any time and thus prevent an unpleasant skid when fully braking with the wheels locked. Since the 1980 season, only one “alarm clock” has remained in the car: a tachometer with a lubrication indicator.

The DAKOS chassis has been completely redesigned. The front axle was cut in the middle, extended by 150mm and re-welded. The steering rods were replaced and the arms were reinforced. The axle was stored in the car differently from the standard version and was equipped with a stiffer torsional stabilizer with a diameter of 18 mm, which had three different options for adjusting stiffness. The PAL brakes on the front axle were disc brakes (with drilled discs with a diameter of 250 mm), with four-piston calipers (34 mm pistons) and Ferodo lining.

The rear axle was replaced by an axle of its own design. It was placed on an auxiliary rail and was formed by forked trailing arms with a sloping axis of oscillation. The drive shafts were fitted with parallel joints of the German brand Löbro. The brakes were also disc on the rear axle, with drilled discs with a diameter of 260 mm and single-piston calipers (32 mm pistons) with floating bearings and Textar brake linings. The brakes were placed at the transmission, thus reducing unsprung masses.

DAKOS designers did not let themselves be embarrassed even in the used drive unit. Although in the 1979 season a car with a Škoda engine with a volume of 1150 cm3, a pair of Weber 45DCOE carburetors and a tuned exhaust pipe was still driving, in the following years it was equipped with an engine from a Škoda 130RS. The 1289 cm3 engine had a bore x stroke (75.5 x 72 mm), a cast iron eight-channel cylinder head and a high degree of compression of 11.5. The fuel mixture was prepared by two horizontal Weber 45DCOE carburetors. The engine reached a maximum output of 128 hp at 8200 rpm. Depending on the selected tires and gear set, the car modified in this way reached a maximum speed of up to 210 km / h. A water cooler was used as standard, Sofico. It was stored in front of the front axle and used only flowing air for cooling, it was not equipped with a fan. The cooling system also included an aluminum oil cooler. The coolant line was made of aluminum for weight savings and good thermal properties.

Driving characteristics have been improved by using modified PAL dampers and shortened and hardened springs. The ground clearance of the car has dropped to 80 mm. The car was mounted on divided electronic wheels ARC Brno 7×13 “, or AZNP 9×13” and 10×13 “, fitted with Barum Racing 235/14-R13 tires.

Can download the Dakos 120L for Assetto Corsa from our Patreon. 3d model is a conversion.