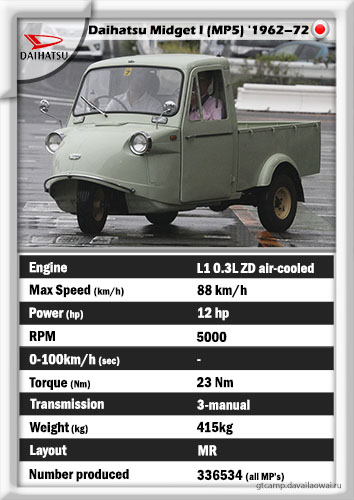 The Daihatsu Midget is a single-seat mini-truck K-car made by Japanese automaker Daihatsu (Toyota in fact). Several distinct vehicles have borne the Midget name over the years, but all have had in common a single or two-seat utilitarian design, with an enclosed or semi-enclosed cab.

The original Midget featured a single seat, a doorless cab, an handlebar steering. In 1957 the DKA Midget wis introduced. The engine wis an air-cooled 2-stroke design o 250 cc which produced 8 PS. Beginning in August 1959 it was replaced by the more comfortable DSA, which has doors and a more powerful 10 PS version of the ZA engine. Maximum cargo capacity was also increased, from 300 to 350 kg. There was also a rare two-seat version – DSAP, with the passenger seat offset to the left behind the driver. This required a longer passenger compartment, which encroached on the cargo area. There was also the DSV, a panel van version.

In October 1959 the MP2 Midget was introduced in Japan – updated with such features as a steering wheel, doors, and seating for two. This model had already been sold in the United States since April 1959, as the MPA, although it was marketed as the “Daihatsu Trimobile”. The engine was the same (ZA) air-cooled two-stroke one-cylinder design with 10 PS but an extra 80 kg made for a sluggish vehicle. Subsequent revisions to the MP design were soon made, resulting in the model MP3 which has the larger ZD engine of 305 cc which produced 12 PS. In May 1960 the 200 mm longer MP4 arrived, featuring roll-up door windows. In August 1961 the doors were modified, now incorporating a triangular vent window and a chromed side strip.

In September 1962, the final version the MP5 arrived, somewhat larger than the MP4 with a maximum length of 2,970 mm, with cargo space increased by 100 mm to a total of 1,260 mm. Nearly all the body panels were altered in some way, with new marker lights installed, redesigned doors, a blunter and more rounded front, bigger vent openings in front of the doors leading edge and finally a solid metal roof instead of the previous fabric type. April 1963 saw the introduction of automatic oil mixing for the 2-stroke engine. In August 1969 new safety regulations required certain lighting changes, including a drivers side headrest and seat belts. 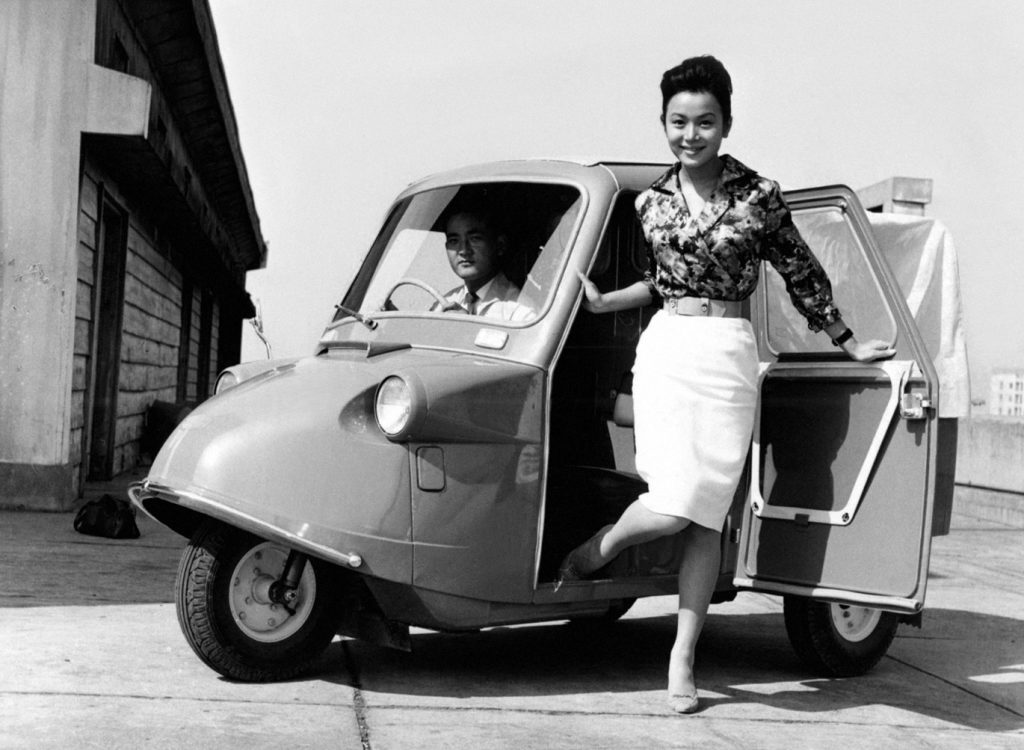 The MP5 remained in production until December 1971, with sales stopping in 1972. By 1972, over 336,500 units had been sold. Production terminated due to the demand for more modern 4-wheelers. The Midget has been sold outside Japan mainly in East Asia (India, Pakistan, Indonesia & Thailand) and they are still being made today by other manufacturers. So if you want to ride one, go to 3-rd world country and have fun!